All The World`s A Stage Summary - Class 11 English Note

Class 11 English All the world`s a stage summary. This is a poem written by william shakespeare. Short summary of the poem for NEB class 11 Student. 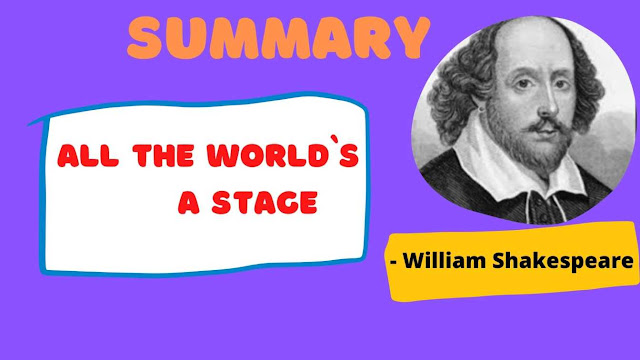 All The World`s A Stage Summary

All the World’s a Stage is an extract taken from Shakespeare’s play ‘As You Like It”. It is a   speech given by a character named Jacques. In this poem, the world has been compared to a stage and every human being is an actor on the stage performing a drama. Generally, a man plays seven different roles in his lifetime and, ultimately, faces death. They are the roles of an infant, a schoolboy, a passionate lover, a soldier, a justice, a Pantaloon, and a worthless old man. The poem closely analyses the characteristics of each age.

According to the poem, every man makes his entry on the stage of this physical world as an infant, who is fully dependent upon others. He grows up in the nurse's arms crying and puking. Then he turns into a schoolboy, shouting and complaining all the time. He is unwilling to go to school and take the responsibility of being a student. It is the morning phase of life. His face is also shining like bright and fresh morning. There is no sign of sadness and suffering on his face. Then a man enters the third stage of life in which he is a bit grown up having a man's roaring voice like of furnace fire. He is highly energetic and also become a passionate lover. Sometimes he is romantic enough and composes songs in praise of his beloved. Sometimes he sings tragic songs and burns in his emotions.

Similarly, in the fourth stage of life, a man becomes a mature and brave young man who performs a role of a soldier for the nation. He fights for the motherland taking strange oaths. He has a beard like that of a leopard and shows a fierce character like it. He is short-tempered and revolutionary by nature. So, he is ready to lay down his life for glory. He never surrenders to the enemies even at the mouth of canon (gun). He is jealous of others’ reputations and keeps seeking glory and reputation at the cost of living. In his eyes, the worldly reputation is the supreme achievement of life though it is transitory.

As time passes, a man is perfectly matured having comprehensive knowledge about the world. In this fifth stage of life, he can perform the role of a magistrate or a judge. He has gained so much knowledge and experience that he can make proper decisions in worldly deeds. His decisions are witty, logical, and down-to-earth (practical). He is guided by perfect wisdom, rules, and regulations. It is the age when he has earned his name and fame. He is formal in his appearance, is aware of maintaining his status or dignity. He has collected much wealth and has lived a well-to-do life. His fair round belly and capon-lined dress witness his status.

Once the man played the role of justice, he is a retired old man. He is no longer in the prime life with a capon-lined belly but in slippers and pantaloons. Physically, he is lean and thin. He loses physical strength, and his voice turns into whistling or piping sounds. The dresses of his earlier phase do not fit him. He has a high status in society, yet he is greedy for more. This stage does not remain for long in his life.

And finally, a man comes back to the second childish phase – as weak, helpless, and dependent upon others as he was in his childhood. As everything fades, his memory is lost. No matter how hard he tries to remember things, he is just unable to do so. Slowly, he begins losing his teeth, his vision, the taste in his mouth, and the love or greed for everything that he once wanted in his life. This is the stage in which he completes the drama of his life and leaves the stage of the world for the next.

Thus, the poem All the World’s a Stage makes us realize that life is nothing, but merely a play. All we need to do is take birth and leave, after performing all our duties. Why do we need all the fame, name, and money? We would have absolutely nothing at all by the end of the play.

Class 11 All The World`s A stage Question Answers

"This is the Poem ( All the world`s a stage ) written by William Shakespeare. In this article you will find the short summary of the Poem which is useful for the class 11 NEB student. You can give feedback in the comment section. We will implement further in the upcoming article."