Class 11 God sees the truth but waits summary. The story is written by Leo Tolstoy. This is the summary of story which is included in NEB Class 11. 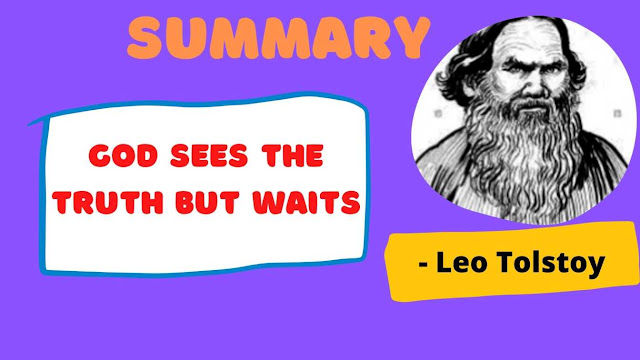 Summary of God Sees The Truth but waits by Leo Tolstoy

“God Sees the Truth but Waits” is a short story written by Leo Tolstoy. The story is about the false conviction and imprisonment of a man for a murder case which he hadn’t committed.
It conveys a message that the greatness of a man lies not in taking revenge but in forgiveness.

Description of Ivan Aksionov and His Journey to Nizhny Fair

Ivan Aksionov was a young merchant from Vladimir. He was handsome with fair curly hair.
He was fond of singing and making fun. Before marriage, he used to drink and show his
violent nature. But after marriage, he had corrected such habit. He had two shops and a
house. One summer, Aksionov was going to the Nizhny Fair. His wife had a bad dream about him. She dreamt that her husband had returned home with grey hair. She thought it was bad dream and requested Ivan not to go to the fair. Aksionov didn’t care about it and decided to go.

The Circumstances that led Aksionov to the Imprisonment

Aksionov drove away to the Nizhny fair. When he had traveled halfway, he saw a merchant
whom he knew. They decided to stay in the same inn that night. After having tea together,
they went to bed in the adjoining rooms. Aksionov had a habit to get up early. He wished to
travel in the cool morning. So, he left the inn before dawn. After traveling about 25 miles,
he stopped to feed his horses in an inn. As he was taking rest in the inn, two soldiers and a
district officer came to him and asked a lot of questions related to the merchant with whom
he had spent the last night. They informed him that the merchant was found dead in the inn
with his throat cut. They searched Aksionov’s luggage and found a blood-stained knife from
his bag. Then, Aksionov was charged with murdering the merchant and robbing twenty
thousand roubles from him.

Life of Aksionov in Prison

Aksionov was arrested and sent to prison. His wife came there to meet him along with
her small kids. She fainted to see her husband among the criminals and thieves in the criminal’s dress. After she came to her senses, she informed her husband about the rejection of the petition to the Czar. Aksionov wept when his wife also suspected him for the murderer. He said goodbye to his family for the last time. He gave up all hope and told himself that God only knows the truth. He was severely tortured in the prison. Later, he was sent to Siberian prison to work in a mine. He lived in the prison for twenty-six years and grew old. In the prison, he learned to make boots and earned a little money. With the money, he bought a book “The Lives of the Saint”. He used to read this book. On Sundays, in the prison church, he read the lessons and sang in the choir. The prison authorities liked him for his meekness. His fellow prisoners respected and called him “Grandfather” and “The Saint.” He was the spokesman among the prisoners.

One day, a gang of new prisoners came to the prison. Among those prisoners, one was Makar Semyonich. He was a tall, strong man of about sixty with grey hair. He related his story to others about his arrest in the horse-stealing case. Once he pointed out that he ought to have come to the prison long ago for a serious crime he had committed, but that time he was not found out. Later, he knew about Aksionov’s story from others. Then he kept laughing shamelessly saying it was really wonderful. When Aksionov asked him whether he knew the murderer, he replied that it must have been the person in whose bag the knife was found, and if someone else hid the knife there, he was not a thief till he was caught. Aksionov couldn’t sleep that night after hearing Makar’s words. He suspected that he might be the person who killed the merchant in the inn. He was quite angry with Makar but didn’t speak a word about it.

Aksionov’s decision not to reveal the truth about Makar Semyonich

One night, Aksionov found Makar digging a tunnel under his cell. Makar threatened him not
to tell a word, otherwise, he would kill him. Aksionov didn’t care about his threats. The next day, soldiers discovered the tunnel. The governor arrived to question the prisoners but no one spoke a word about the tunnel. When Aksionov was asked about it, he also remained unknown. He felt that he had suffered twenty-six years in prison though he hadn’t committed any murder. He had lost his family. Perhaps, his wife was dead and the children had forgotten him. He had no desire to leave the prison. His life was ruined anyway. He didn’t want Semyonich to be severely punished because he was not revengeful. He also thought God would punish him if his suspicion was wrong. So, Aksionov didn’t say anything about the misdeeds of Semyonich to the governor.

Most forgiving manner of Semyonich

As Aksionov saved him from being punished, Makar was grateful to him. Makar quietly came to Aksionov at night and begged for forgiveness. He confessed the truth that he had murdered the merchant in the inn and had hidden the knife in his bag. Makar urged Semyonich for forgiveness and started weeping. Askionov also wept together. He forgave Makar thought that forgiveness is the best form of revenge and felt lighter. At last, Makar confessed his crime before the governor. When the order for Aksionov’s release came, he was already dead. Thus, the title of the story says that God gives justice to everyone, but it takes a long time. We should wait for the truth to win.

"This is the  story( God Sees The Truth but waits) written by Leo Tolstoy. In this article you will find the short summary of the story which is useful for the class 11 NEB student. You can give feedback in the comment section. We will implement further in the upcoming article."