Class 11 The wish summary of the story written by Roald Dahl. This is story of class 11 English book of Nepal.This story describe the wish of child. 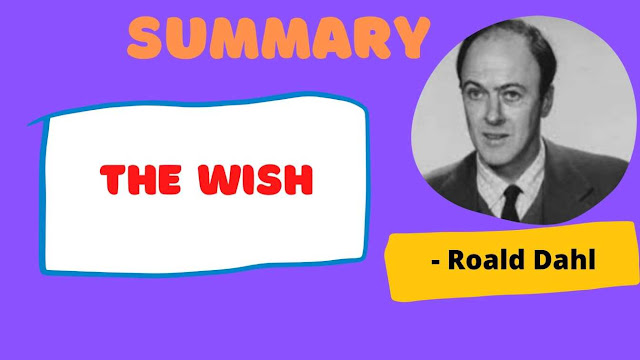 “The Wish” is a short story written by Roald Dahl. The story is about a child’s imaginative game plan which is quite tough to play. The child’s imaginative game is about crossing a red carpet laid on the floor of the hall stepping on the right color. The game is connected with the child’s wish of getting a puppy on his birthday after its successful completion. So, he is strongly motivated to accomplish the game at any cost.

The story opens with a small boy picking a scab off his knee. As he was sitting on the stairs observing different colors on a red carpet, he got lost in the imagination and interpreted the red, yellow, and black colors in the carpet differently. He supposed the red patches as hot lumps of coal that would burn him up completely, and the black parts as poisonous snakes that would bite and kill him. He took the yellow patches as a safe zone. He decided to play a challenging game of crossing the carpet through the safe zone. If he could make it all the way across without getting burnt or bitten, he would get a puppy for his birthday tomorrow.

The boy began his quest. The yellow part was a bit thin and there were one or two wide gaps. He advanced carefully on the yellow channel. The first part was easygoing. About halfway across, the channel curled off sideways and he had to take a long stride there. The black and red spots ahead made him so panic. He wobbled to take a long stride. Anyway, he could balance his body by waving his hand. He stood for some time on big safe Yellow Island and continued his journey with the goal of getting the puppy. He paused himself and stepped further very carefully.

Just a step ahead of his halfway, the child had to choose an option whether to move on the left or right. The left side was more difficult for him to step, but there were fewer black spots. So, he decided to move ahead on his left. He took his next step on the yellow spot. He nearly touched the black spot which was a centimeter close. In his imagination, the snake raised its head to see if he touched it. So, the child cried in a very panicked tone, “I am not touching you! You mustn’t bite me.”Another snake rises as well, and the child is frozen with terror for several minutes.

The next step was a very long one, too long to jump. There was a deep curling river of black that ran across the width of the carpet. Once he thought of jumping across it, but he couldn’t be sure of landing accurately on the narrow band of yellow on the other side. The child managed to get one foot across and tried to transfer his weight but couldn’t. As he was doing the splits, he was stuck. He looked down at the oily bodies of the snakes writhing beneath him. He began to wobble, waved his arm to keep his balance but all the efforts were in vain. Finally, he fell over the black spots. He gave a loud cry when he touched the black. His mother was looking for him far behind the house outside.

Thus, the story is about a small boy’s fantasy in which a red carpet is alive with snakes and fire. The writer has presented an imaginative and curious small boy to reflect the delicacy of childhood imagination. The child wished for a puppy as a reward for the completion of the tough game. He struggled hard to achieve it but he failed to achieve it when he got lost in the game.
"This is the Stories( The Wish) written by Roald Dahl. In this article you will find the short summary of the story which is useful for the class 11 NEB student who are reading in Nepal. You can give feedback in the comment section. We will implement further in the upcoming article."