Class 11 Civil Peace chapter 5 Solution of Question Answers. The Story has different verse of question pattern. You can s find your exercise note. 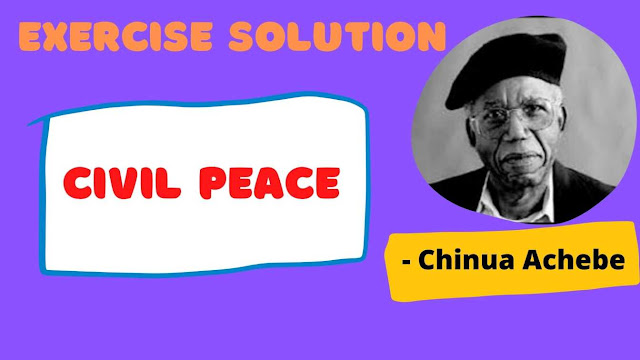 c. Why did Jonathan mistrust the officer who wanted to take his bicycle? What
does this tell you about the situation in Nigeria?
=> Jonathan studied the way the officer was behaving while demanding Jonathan`s bicycle in the name of law, and he suspected the officer that he could be amenable to influence. Jonathan got his bicycle back from the officer in only two pounds. This incident of an officer being bribed by Jonathan shows that there was the prevalence of corruption among government jobholders who would get bribes from those poor Nigerian citizens during civil peace.  Because of lack of peace and harmony, famine, unemployment people suffered a lot and those who were in government jobs became corrupted.

d. What visitors might be at the door? Are Jonathan and his wife completely
surprised? Explain.
=> At midnight Jonathan heard some knocking at the door. The second knocking was so loud and imperious. Jonathan heard a reply, " I am a thief and my people" from outside when he asked who they were. So the visitors, at midnight, could be no one other than the thieves who had gone at Jonathan`s house to rob him. Jonathan and his wife are completely surprised and they beg help from Neighbor and police. They had never met such visitors at midnight before.

e. Why does no one in the neighborhood respond when the thieves pound on
Jonathan’s door? Why do the thieves call for the police?
=> A gang of thieves has come with weapons and they have fired in the sky to threaten Jonathan's family.  Because of the fear of being robbed and killed, their neighborhood does not respond when they pound on Jonathan`s door. The thieves call for the police to mock Jonathan's family because they know that nobody comes there to save the family.

a. What does Jonathan mean by his expression “Nothing puzzles God”? What does
this expression reveal about his character? Explain by citing details from the
story.
=> God is called upon regularly throughout the story. mostly in the way, others might refer to fate. Both in terms of positive and negative situations, Jonathan`s religious sensibility is reflected by his refrain: “ Nothing puzzles God”. Jonathan repeatedly refers to positive outcomes – like the survival of his home and family as “ blessings” or “miracles”. Likewise, he believes that “ Nothing puzzles God” in bad situations, like with the coal corporation`s closing or with the climactic robbery. By imbuing God with the power to understand, Jonathan frees himself from agonizing about the seemingly random experiences of the civil war and its aftermath. He may not understand, but God does. This allows him to use his energy constructively in the present instead of self-pitying in the seemingly hard-to-make-out past.

b. How does Jonathan change as he experiences the conflicts in his life? Explain.
=> Jonathan Iwegbu is the protagonist of “ Civil peace “. He is defined by optimism and hardiness, even in the face of great tragedy. Despite the devastation of the civil war, Jonathan celebrates what he still has rather than regretting what he has lost. For instance, he gives thanks for the lives of his wife and three living children, instead of mourning the son he buried. Jonathan is not only optimistic but also industrious. Instead of waiting for the situation to change, he starts several businesses. Through the end of the story, he remains focused on the future. Even when his ex gratia money is stolen by thieves, he tells sympathetic neighbors that he “counts It as nothing” and continues to work.

c. Read the extract and answer the questions below.
“To God who made me; if you come inside and find one hundred pounds, take it
and shoot me and shoot my wife and children. I swear to God. The only money I
have in this life is this twenty pounds egg-rasher they gave me today ...”

ii. Who is the speaker talking to?
=> The speaker is talking to the head of a gang of thieves who have come to rob him.

iii. Who does “they” refer to?
=> “They” refers to the person who gave him ex-gratia or egg-rasher.

d. Nigerian English has words like soja 'soldier' and katakata 'confusion', 'trouble'
derived apparently from English words but transformed by native languages'
phonologies. What does the author’s use of dialect here add to the story?
=> There is an extended dialogue between Jonathan and the thief leader in the last section of the story. The language Jonathan speaks is quite different from the language the gang of thieving speaks. Jonathan speaks clearly, with a strong sense of grammar, the thieves are clearly uneducated. This shows the split in the community. The English is spoken there is transformation by Native languages phonology and it has a musical, theatrical quality that echoes back to tribal ritual recalling an Igbo past in contrast Jonathan has long traded for the more “ civilized” town life. They are of the same people, yet fundamentally unconnected.

f. The title of the story "Civil Peace" itself is ironical as there is little to differentiate
‘civil peace’ from ‘civil war’. Do you think that the title of this story is appropriate,
or would “Civil War” have been a better title? Explain.
=> The title of the story: Civil peace” is ironic because the period is neither social nor peaceful and there is even no law and order. The presence of government officials' corruption and robbery and theft are the evidence of this. People are not actually enjoying the rule of law and peace during the time of civil peace. Actually, there is no peace; still, people are suffered from hidden violence. The only difference between “ civil peace “ and “civil war” is that the violence is hidden in civil peace where as the violence is direct in civil war. I think, though ironic, the title “civil peace” is appropriate because the story is about the period of civil peace after the declaration of the end of the civil war. The title “ civil war” would not have been better than the title “civil war” because the story wants to tell us the post-war situation or consequences of the war during the period of “civil peace”. Or in other words, Chinua Achebe wants to define to the readers what “civil peace” means.

a. How would you describe the civil peace in Nigeria?
=> The Biafra war of civil war is Nigeria between 1967 and 1970 caused lots of death and damages in Nigeria. Biafrans suffered a severe famine and nearly a million people died of starvation. People suffered a lot in Nigeria in the post-war period. The time of civil peace was a time for resettlement for the Nigerian people. People have lost jobs as many government companies have been closed. They have to start their life again from zero level doing hard works. People have to face different problems such as not getting enough foodstuffs, government officials being corrupted, and still, theft and robbery prevail. Surviving is the main thing doing any kind of work that is available or possible, there is no law and order as there is a high risk from armed criminals.

b. What kind of attitude towards life do you think you would have if your situation
was similar to that of Jonathan’s?
=> Nobody knows when people have to suffer natural and human-induced disasters anytime anywhere. Floods, earthquakes, famine, wars; pandemics can take away millions of life and property. We also faced 10 years of civil war and a great earthquakes and now we are facing the challenges caused by the COVID-19 pandemic. In such a situation, I also like to survive as Jonathan survives in the story being hardworking and optimistic forgetting their bitter past. Instead of regretting the loss in such a period, I try to start a new life by managing the available things.

c. Draw the character sketch of Jonathan Iwegbu.
=> Jonathan Iwegbu is the protagonist of “ Civil peace “. He is defined by optimism and hardiness, even in the face of great tragedy. Despite the devastation of the civil war, Jonathan celebrates what he still has rather than regretting what he has lost. For instance, he gives thanks for the lives of his wife and three living children, instead of mourning the son he buried. Jonathan is not only optimistic but also industrious. Instead of waiting for the situation to change, he starts several businesses. Through the end of the story, he remains focused on the future. Even when his ex gratia money is stolen by thieves, he tells sympathetic neighbors that he “counts It as nothing” and continues to work.