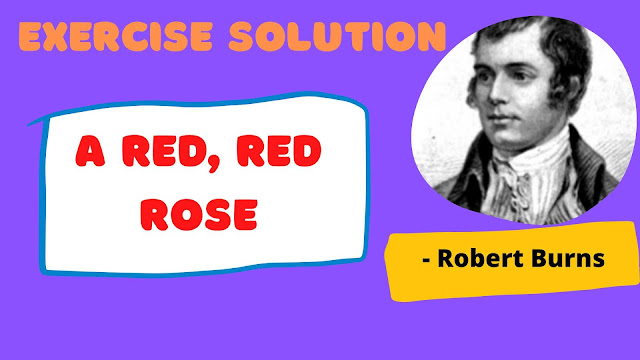 c. What imagery does he use in his promise, and why do you think he uses such
language?
=> The speaker has exaggerated his love to his beloved by using various imageries. For example, he has said that he will love her until seas go dry, rocks melt with the sun and until the sand of life runs. In nutshell, he has tried to explain his unconditional, pure, true, and evergreen love to his beloved.

e. Which image in the poem do you find the most memorable or surprising and
why?
=> In the poem, I find the image of the speaker promising to love his beloved until the seas dry the most memorable or surprising because it`s completely impossible for the seas to dry out because the seas never dry. Even if they dry, there will be left nothing on the earth. It`s his way of persuading his beloved to show her that how deeply and truly he loved her.


Reference to the context

a. What can you infer about the speaker’s devotion to his beloved from the following
lines?
And I will come again, my love,
Tho’ it were ten thousand mile!

=> From the given lines of the poem, I can infer that the speaker is totally devoted to his beloved. He has promised her beloved that he will be back to her wherever he goes, no matter the distance, Even if it's 10,000 miles of a long relationship, his love won`t die for her, he will keep loving her.

Overall, these lines represent the immortality of his love towards his beloved.

c. Paraphrase the whole poem into simple prose form.
=> ‘A Red. Red Rose is a romantic poem by Robert Burn. There are four stanzas having four lines in each stanza. It is a lyrical ballad (Song). He has expressed deep and true love by comparing his beloved to the red rose and sweet music in the first stanza. He has promised to keep loving her till the seas dry; rocks get melted with the sun and sand run over from the earth. Finally, he promises her that for a moment he would be away from her but would get back to see her again even it is ten thousand of miles to cross. That means the distance can`t separate them from loving each other.

d. Literary devices are tools that enable the writers to present their ideas, emotions,
and feelings and also help the readers understand those more profound meanings.
Analyse the poem in terms of the literary devices such as simile, symbolism,
imagery, alliteration, and assonance.

=> Any creation in poetry consists of various literary devices, which add music, colour , and meaning to its spirit of it. Here in this romantic poem, poet Robert Burn has used various literary devices simultaneously which enable him to present his ideas, emotions, and felling and it has helped us understand them more profound meanings. For instance, the poet has used a good example of a simile in the line “ O, my love is like a red red rose”. The use of ‘like’ is simile. Similarly, he compares his beloved with a red rose, which symbolizes ‘love’. So he has cleverly used symbolism as well. To persuade his beloved with his deep love and true love, he has used hyperbole by using images like seas, rocks, and sands and promises with her that he would love her till seas dry; rocks get melted with the sun and sand run. Pretty amazingly he has used ‘ alliteration’ in the first line of the poem that ‘ oh, my love is like a red red rose’. Here in this line, there is the repetition of “I “ Sound in like and love. Similarly ‘r’ sound in red, red rose is repeated. Meanwhile, ‘assonance’ in red, red ‘e’ sound can be placed.

e. What is hyperbole? Explain its purpose citing examples of hyperbole used in the
poem.
=> Hyperbole is a way of expressing exaggeratedly something to someone. In the poem, the speaker has also used hyperbole. The main purpose of citing such hyperbole in the poem is to persuade his beloved with deep love, care, and respect. In the poem, the speaker has promised his beloved that he would love her till the seas dry. They don`t happen so in practical mode but he is trying to convince her to trust in his love.

f. What is refrain? Why is it used in the poem? Explain citing an example from the
poem.
=> The refrain is the repetition of the same line or idea in the poem. It is used to emphasize how the speaker is convincing his beloved to trust in his appeal for his love to make it come true. For instance, in the second and third stanza the line ‘And I will love thee still, my deer’ has been repeated. This refrain emphasizes how much truly he loves he beloved from his heart.

b. Do you think that love has power? Why do the poets compose poems addressing
their beloved?
=> Without any single doubt, I would like to say that ‘love’ has profound power, which can transform even a wild being into a decent human being. The poet are highly imaginative. They don`t trust in physical contact. They believe in their words, which they believe that they can persuade their beloved than they physically talk to them.

c. Poetry is the expression of feeling and emotions. Explain.
=> People, who fall in love, become highly imaginative. They are sensitive and guided by their emotions than reasons. They prefer a short-medium to express their feelings and emotions. So, poetry is the best means for them to pour the stream of innermost voices out to make the listeners trust in their appeals.  Reasons have logic but emotions have only voices. So poetry has voices, which try to persuade someone in charming melody.