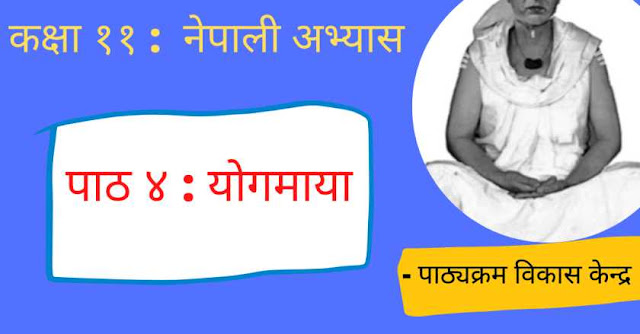 Yogmaya jibani is the biography of Yogmaya Neupane, She was born in 1867 and died in 1941. Yogmaya is all about the biography which you can read from the book. Here you can get the complete Exercise Solution.
Next : Sathi lai Chithi Class 11 Nepali Exercise Notes 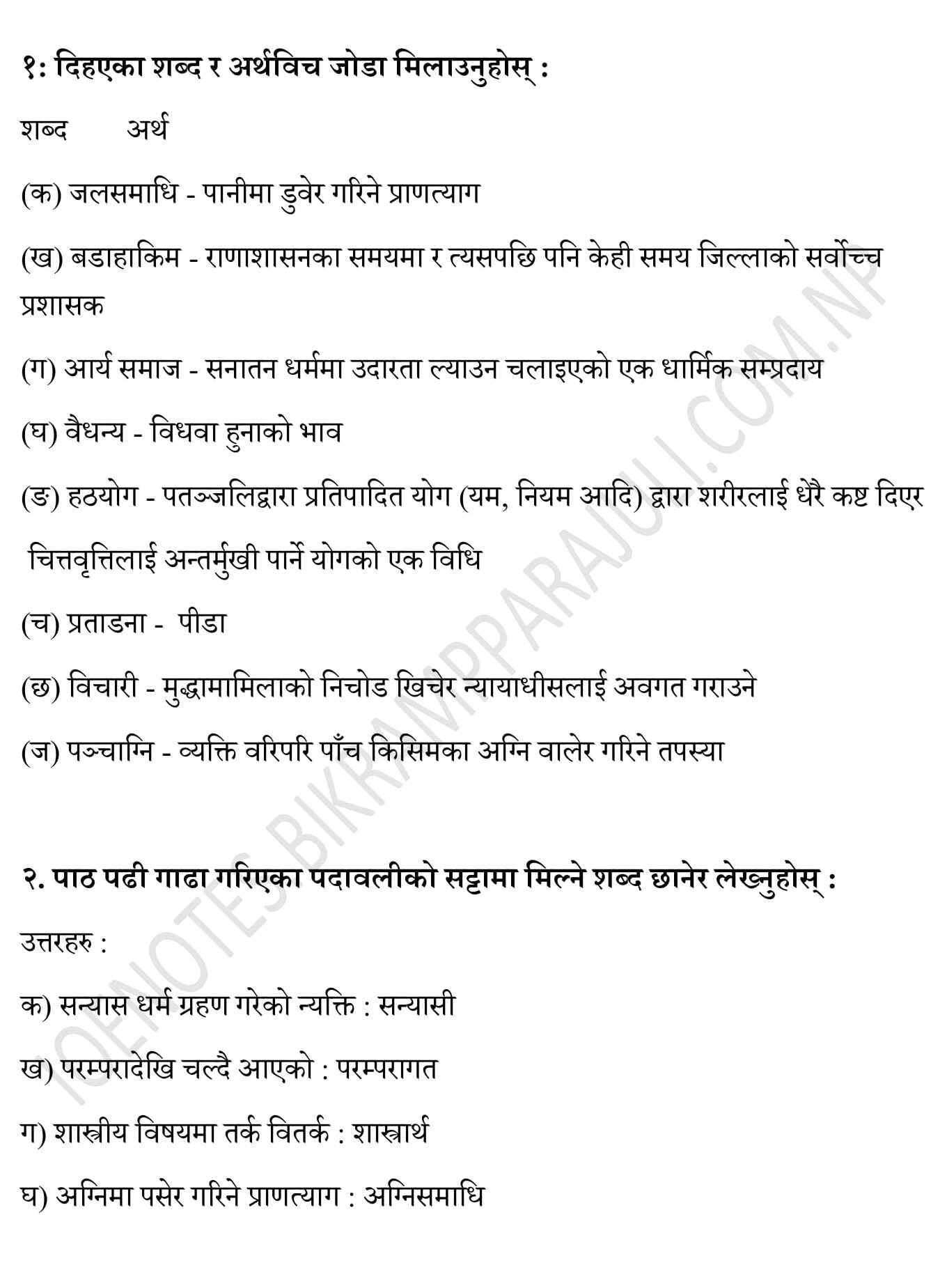 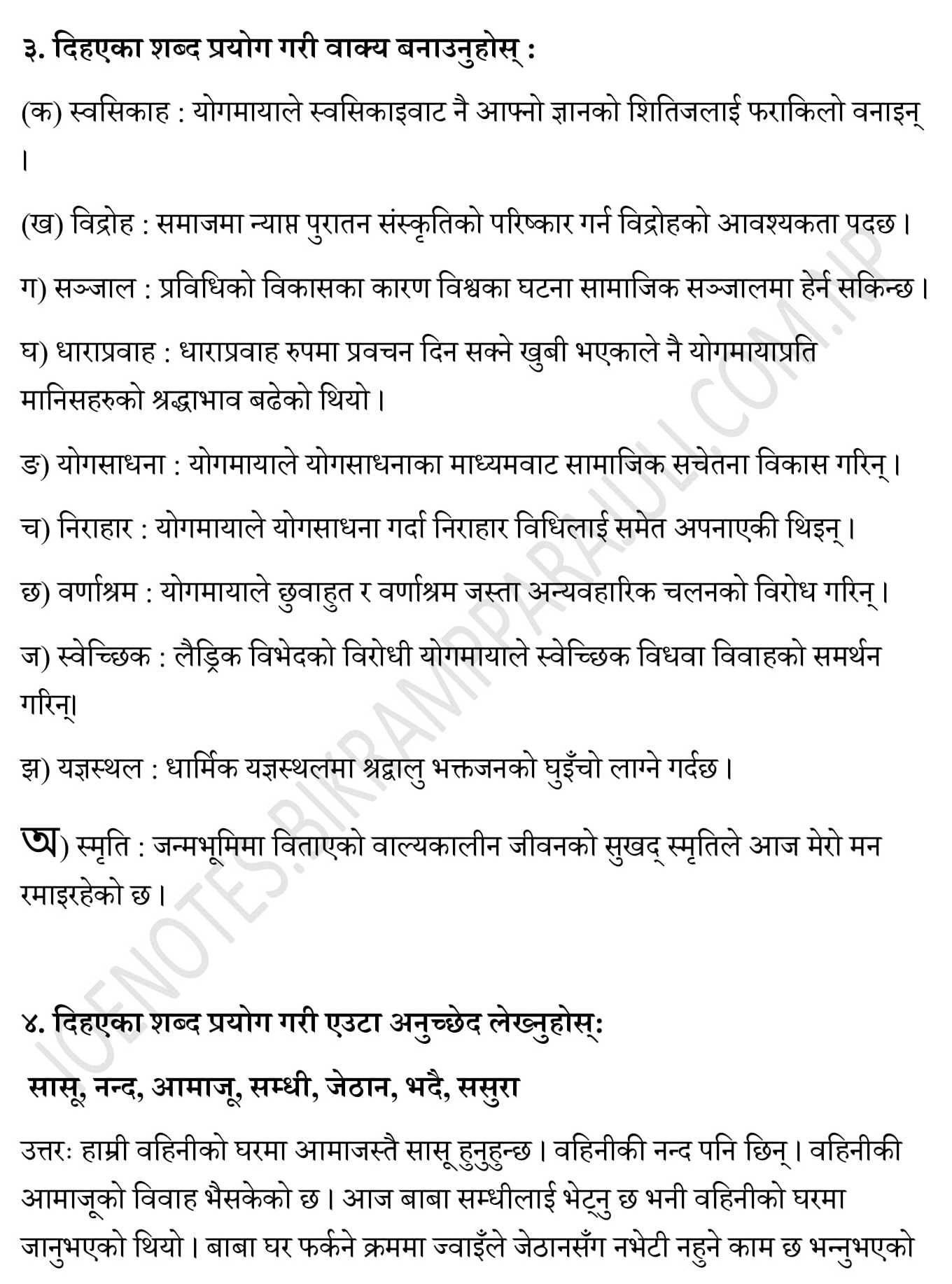 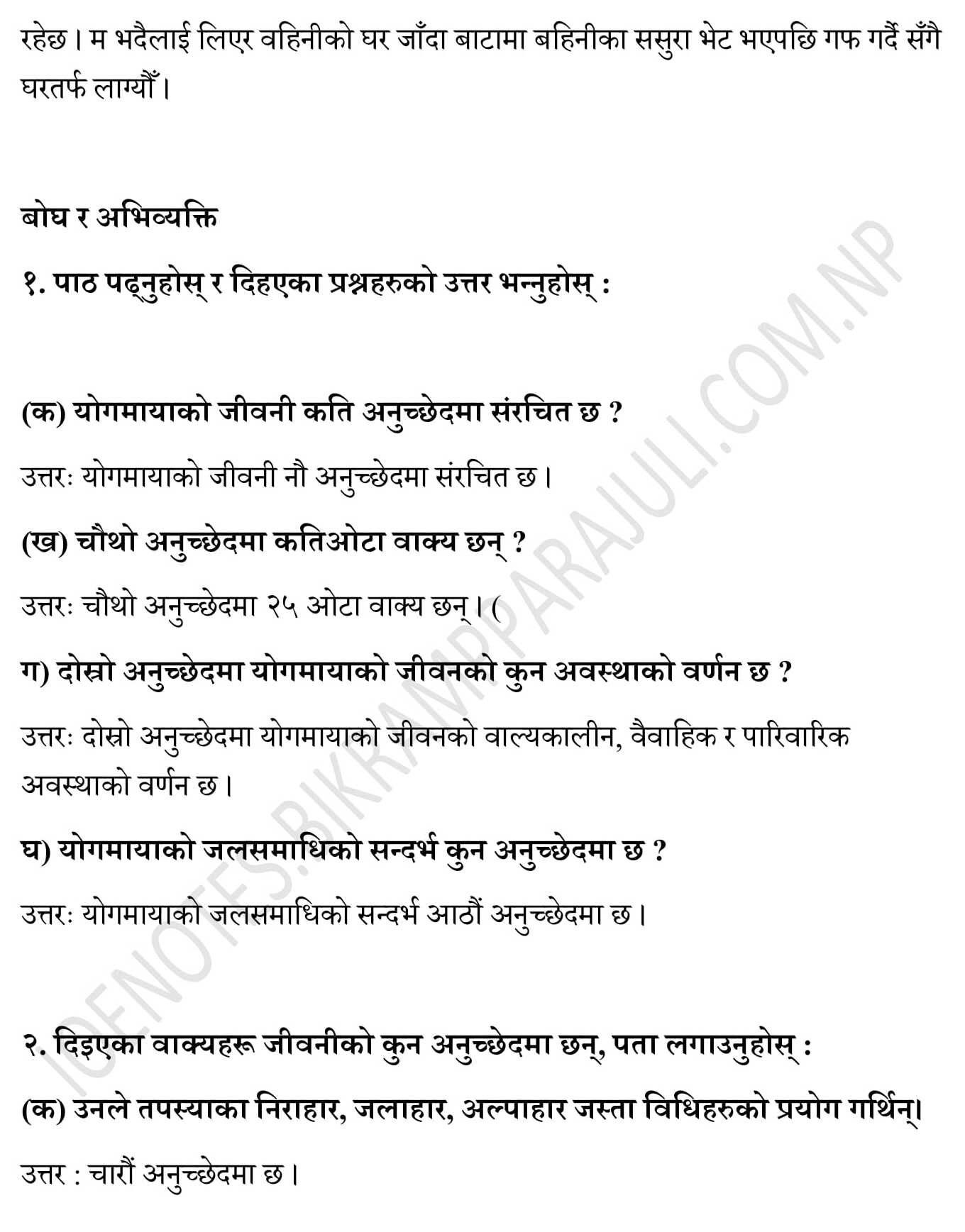 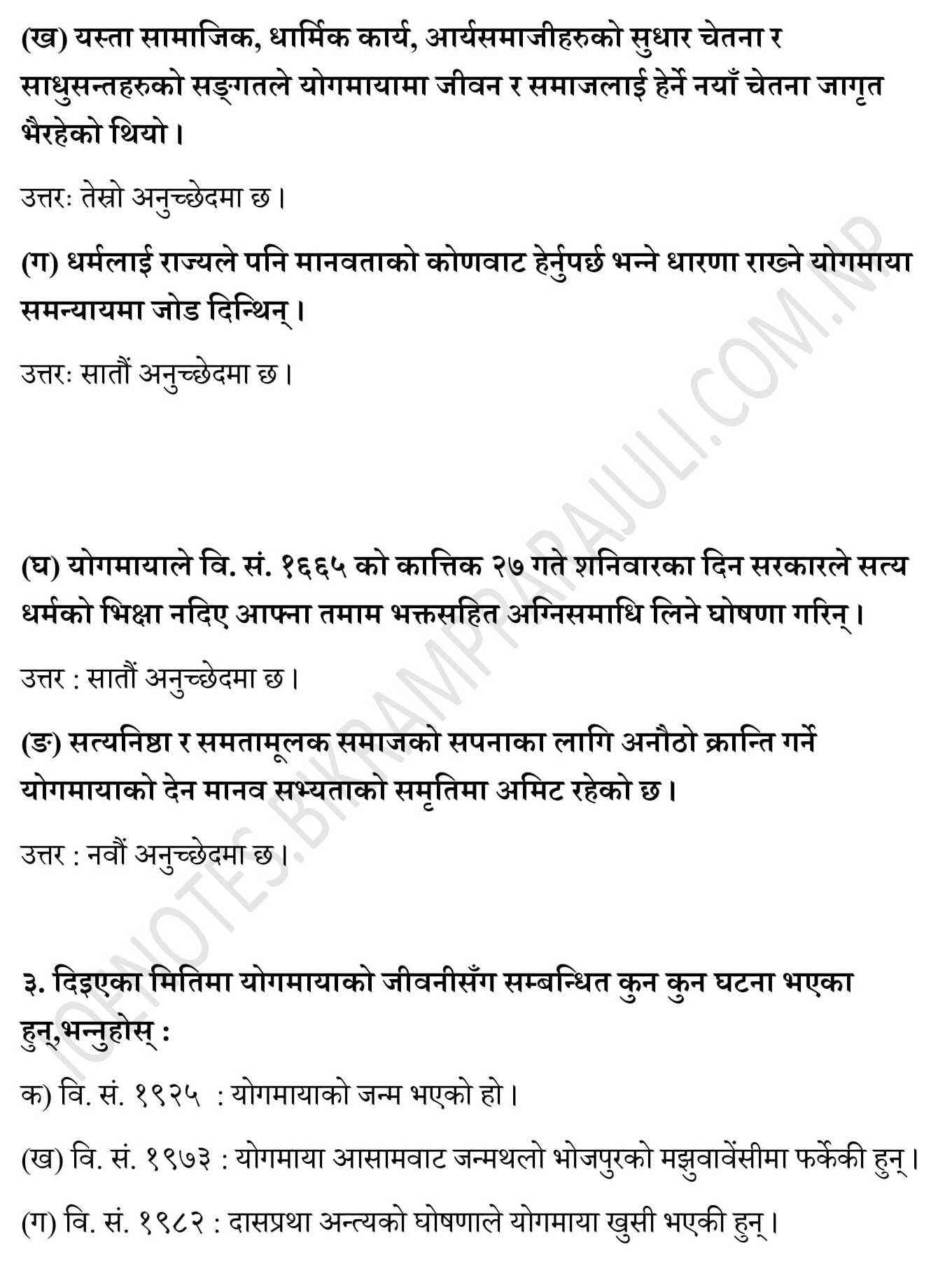 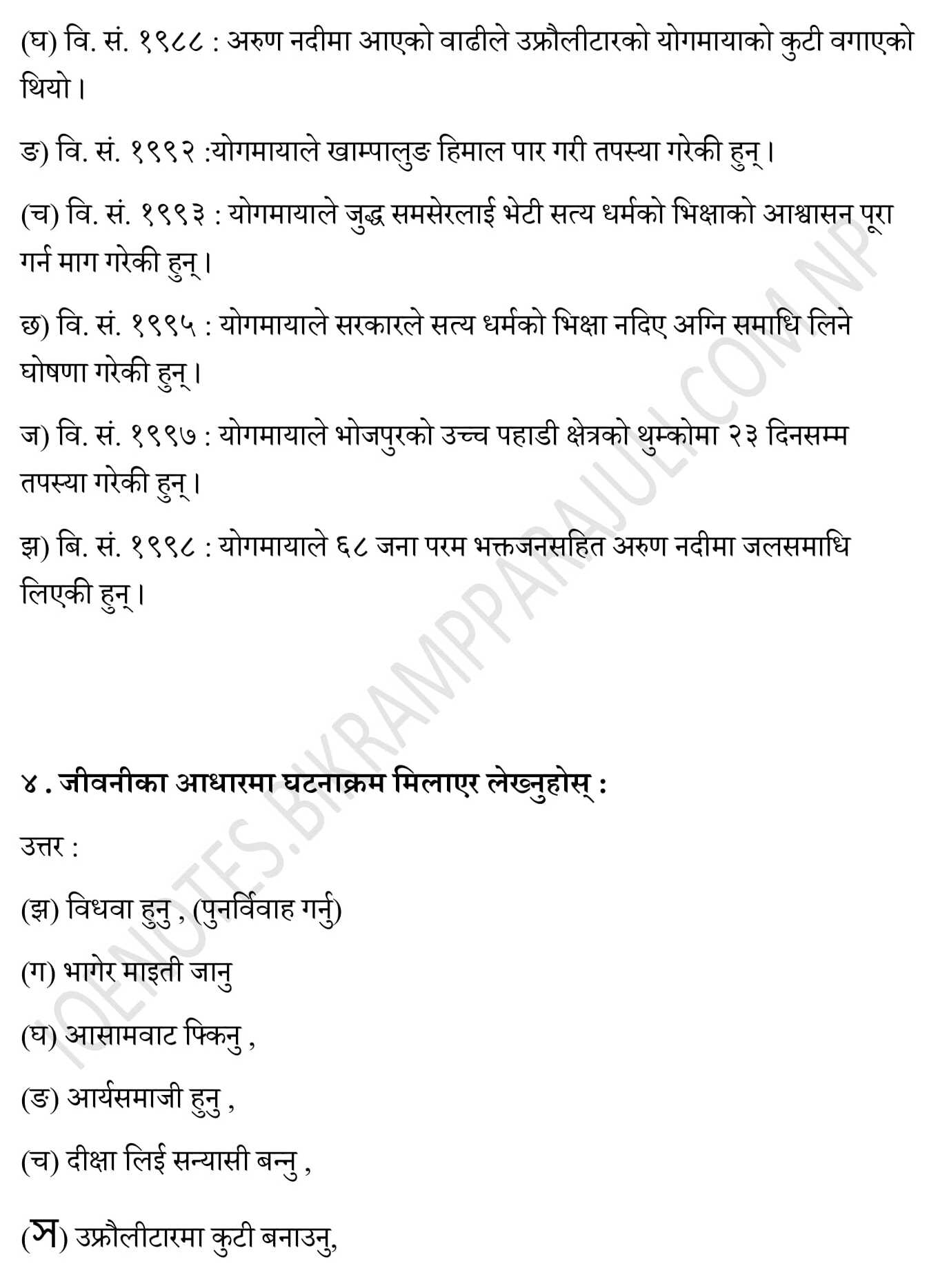 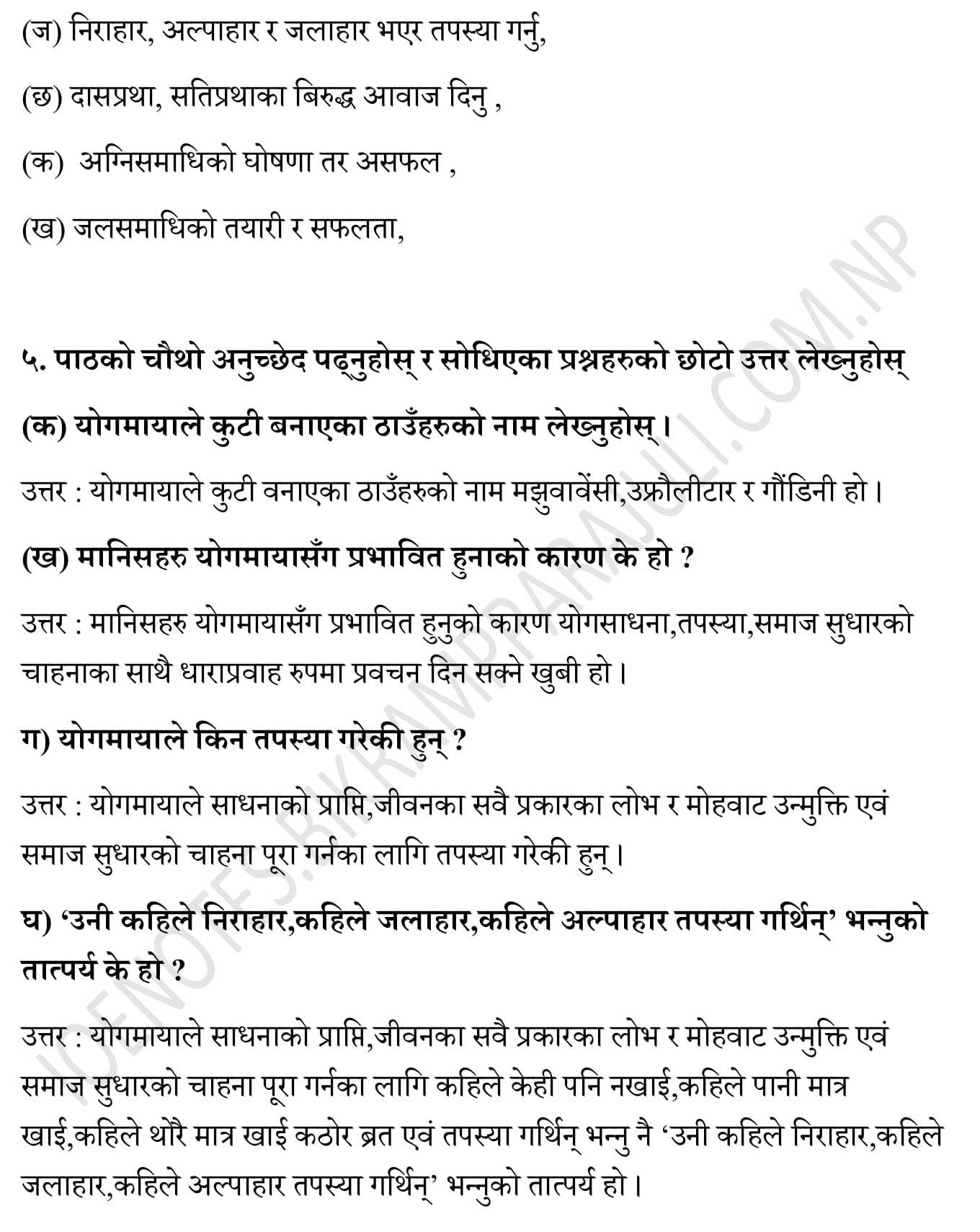 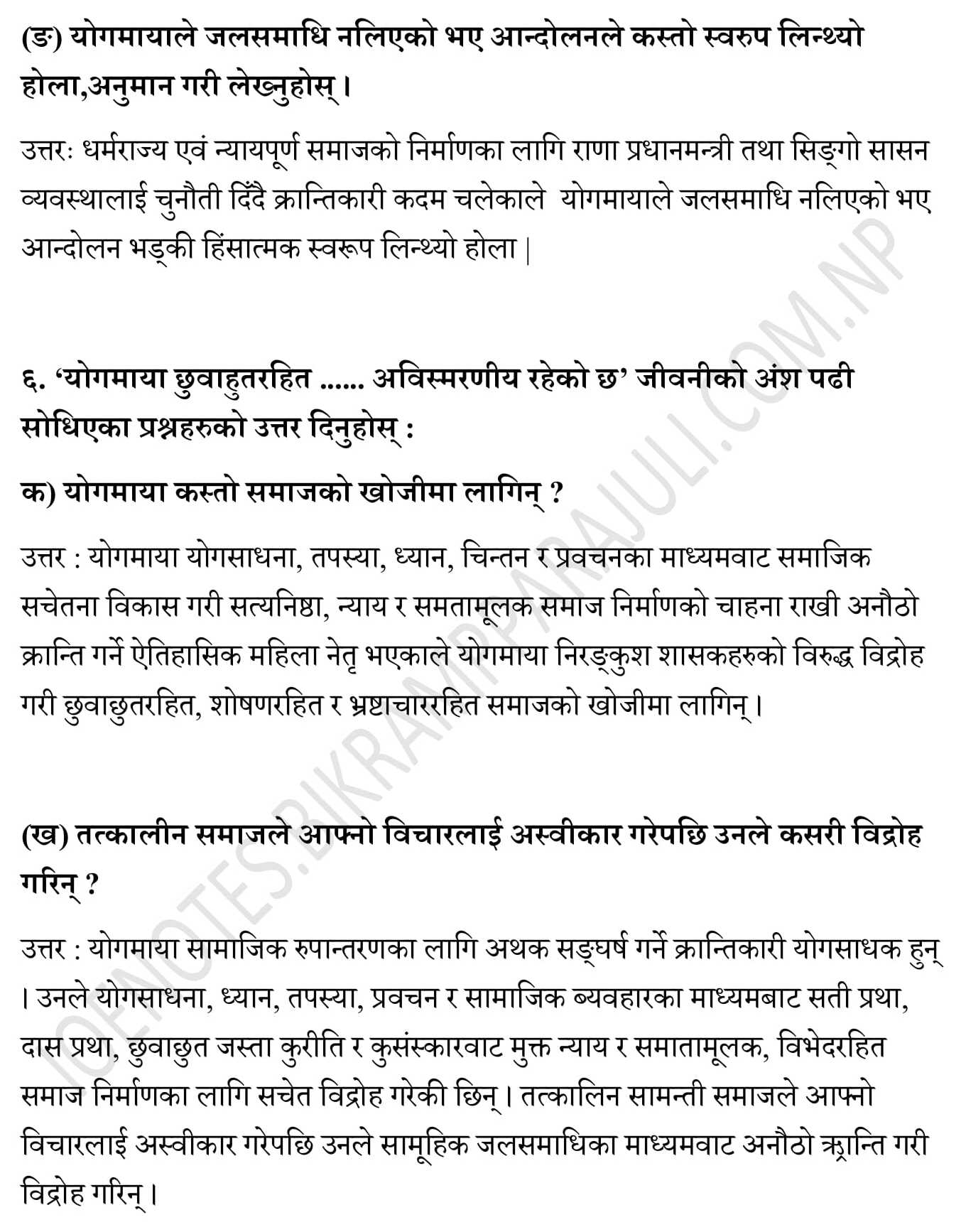 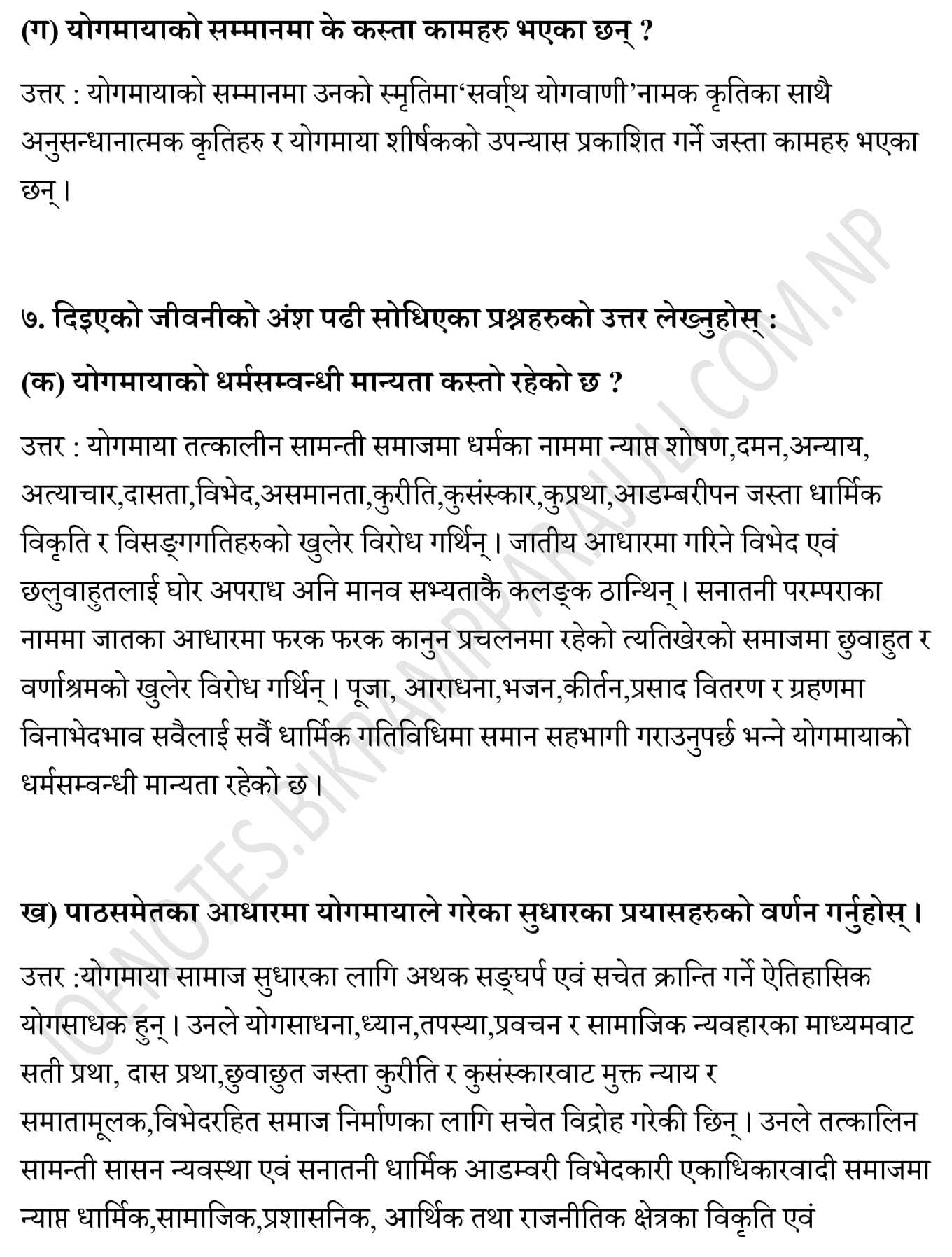 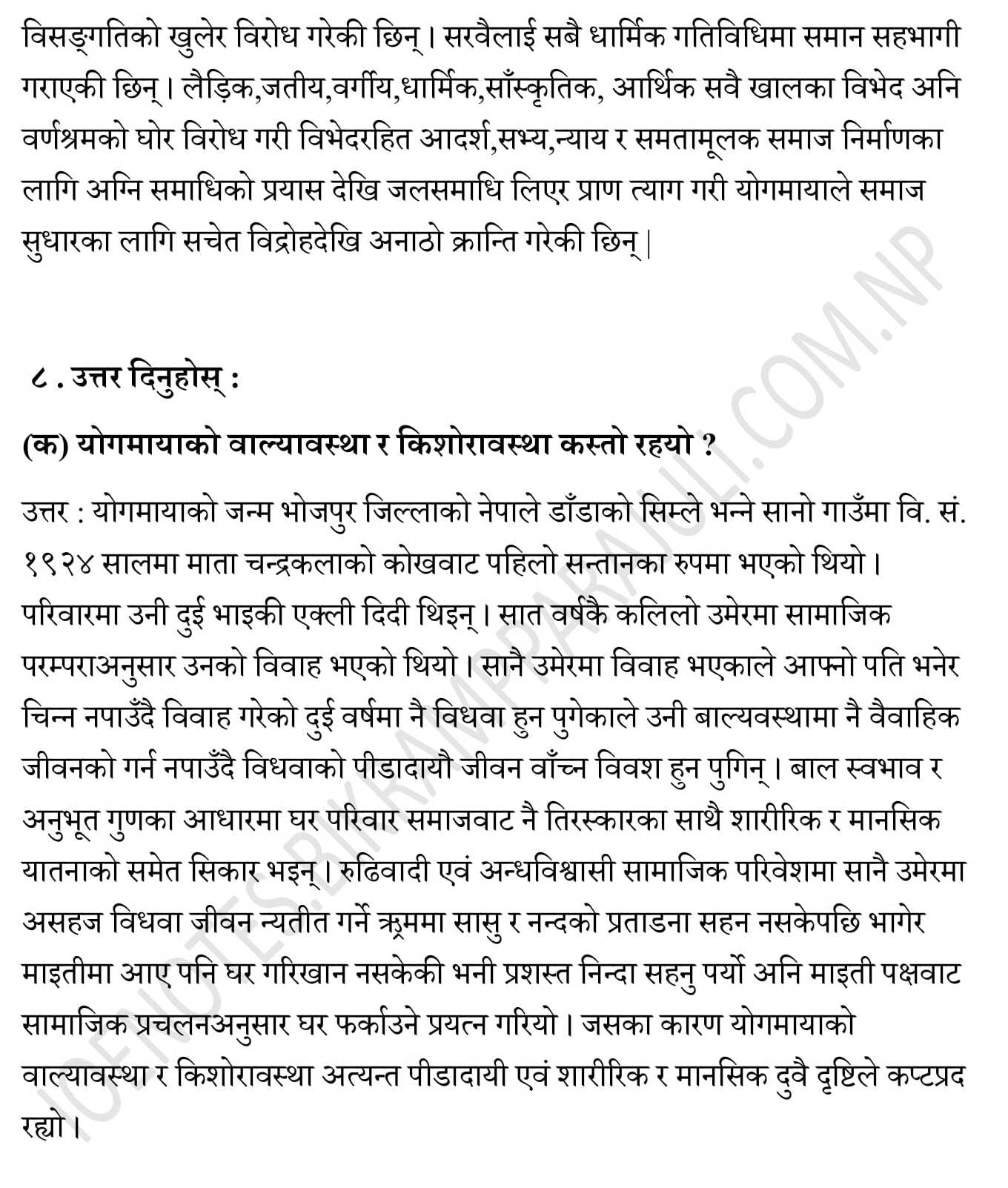 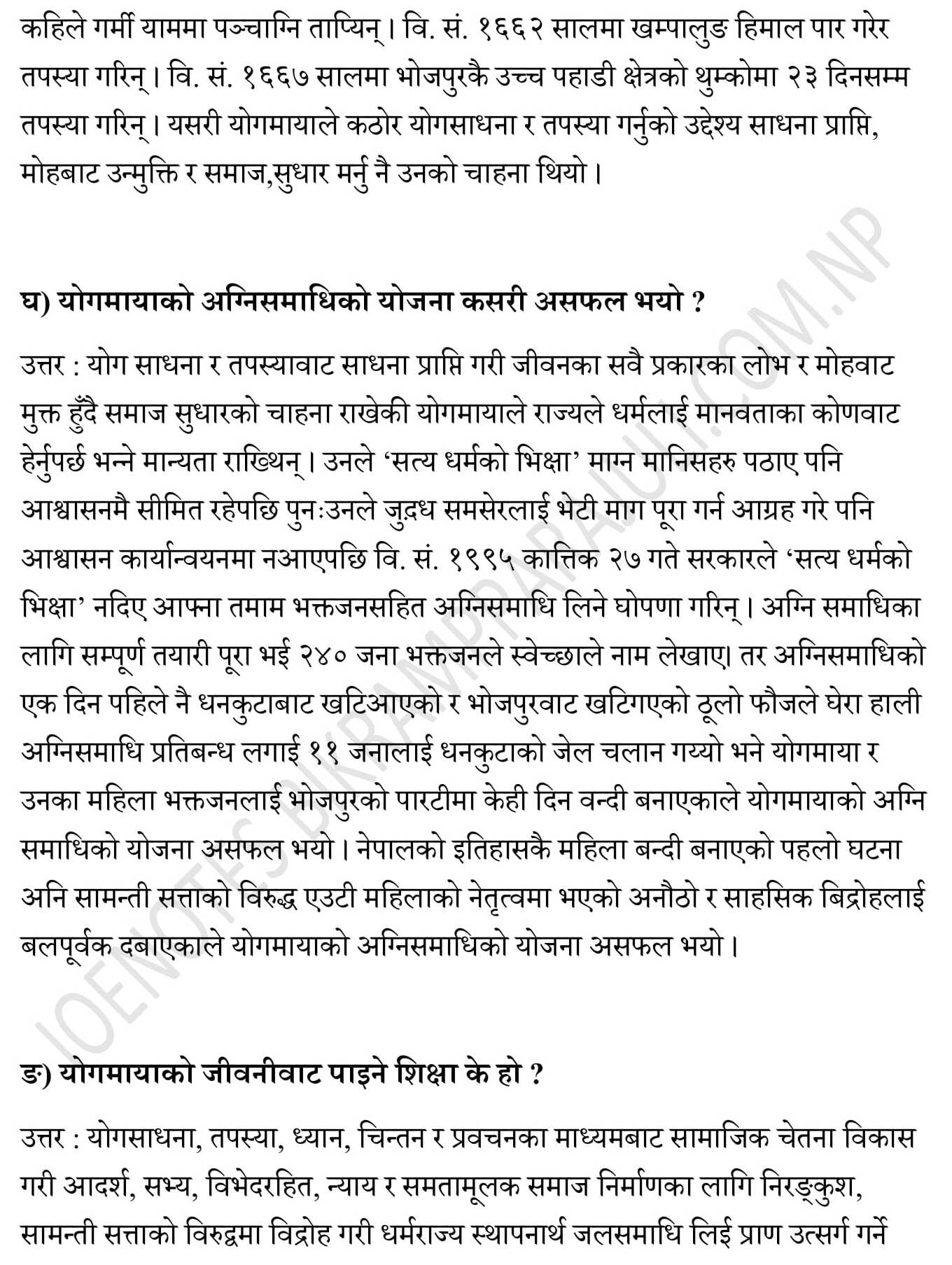 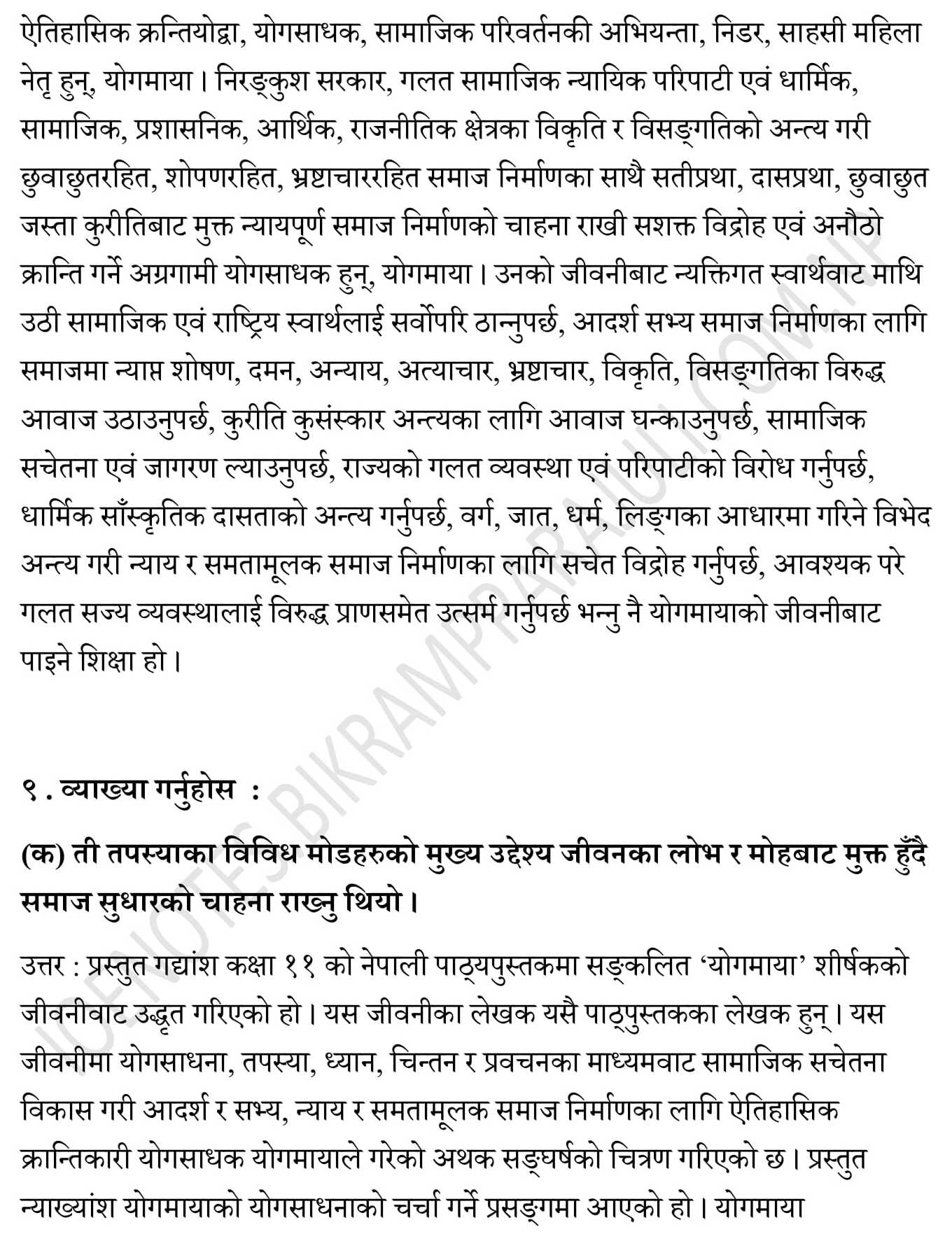 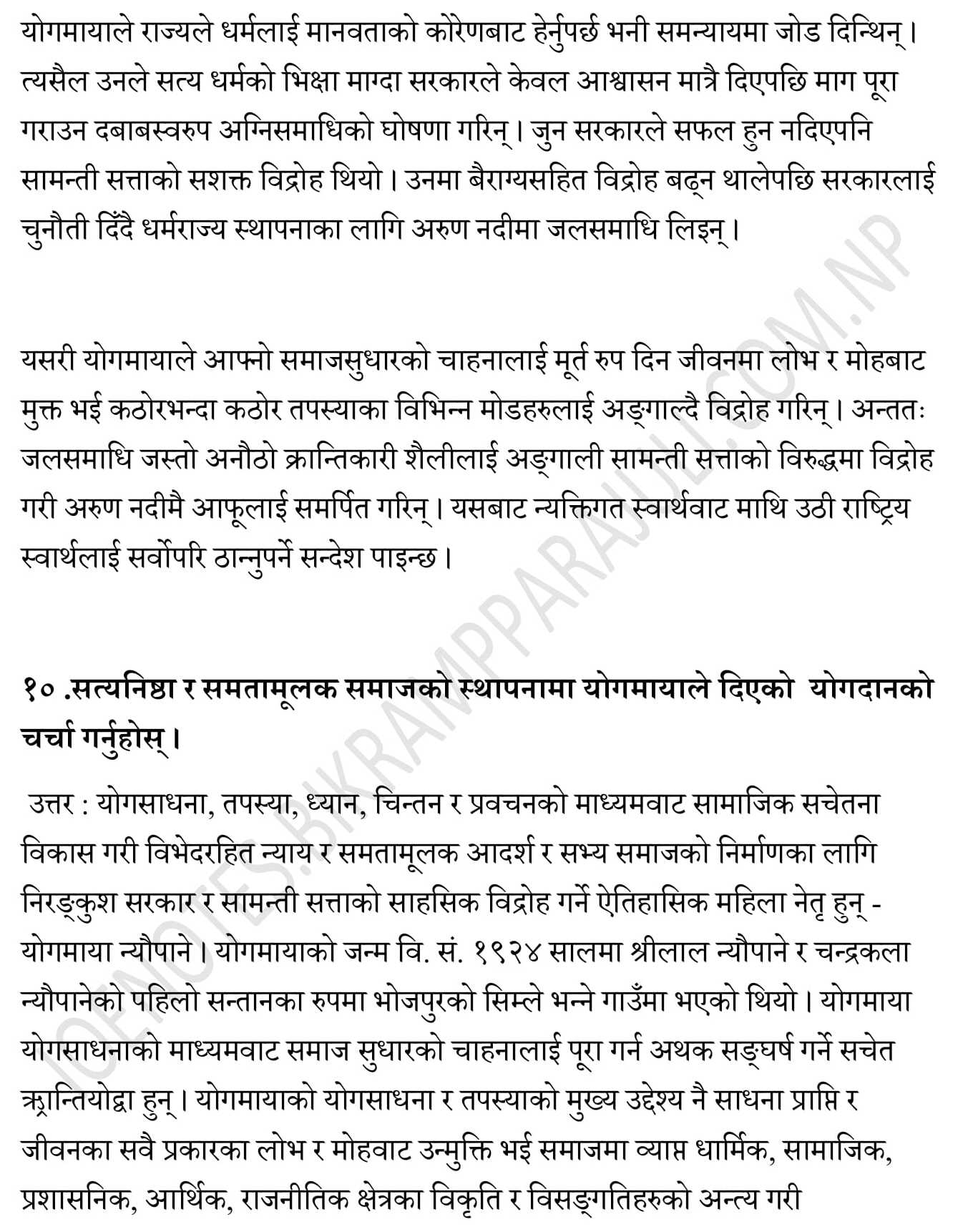 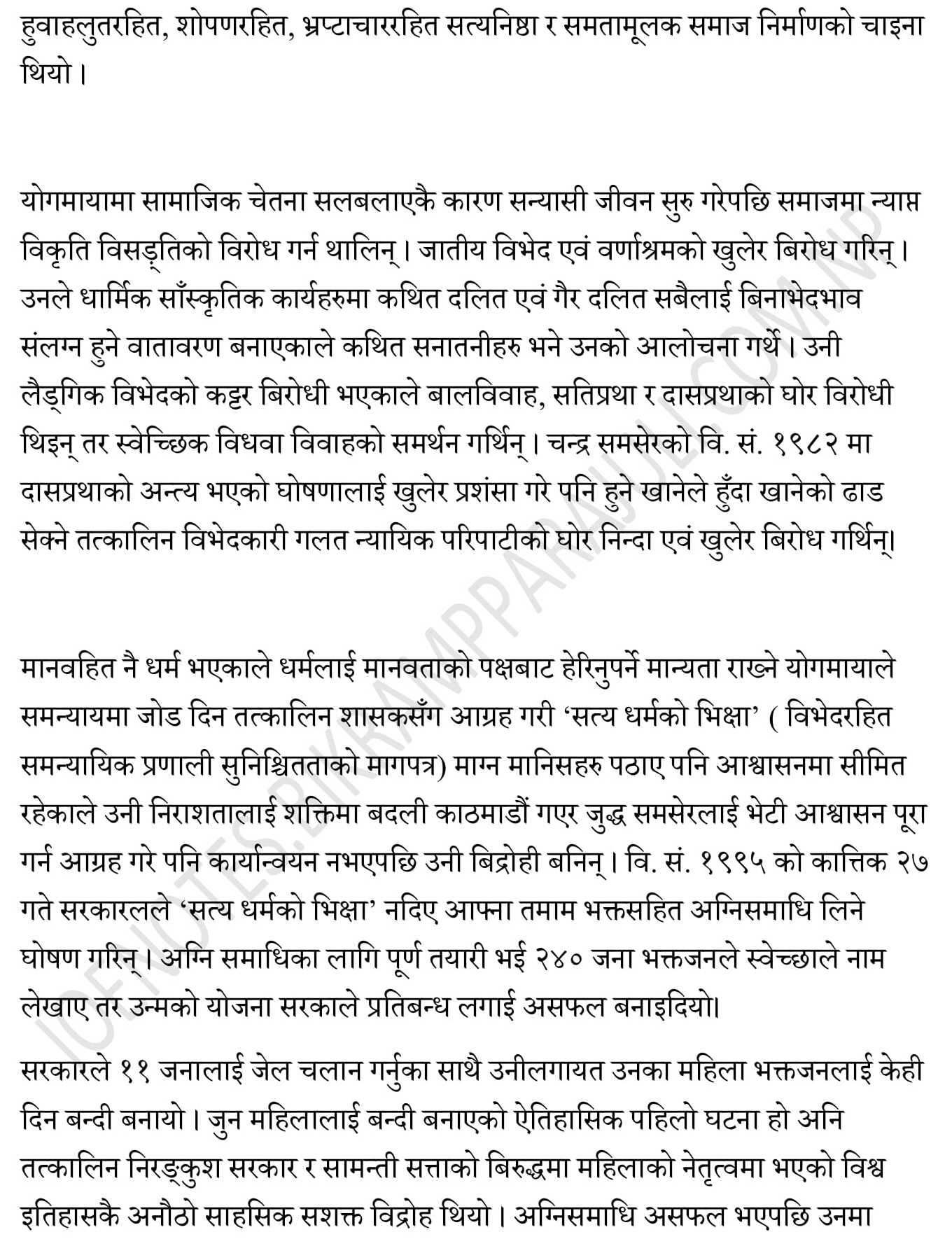 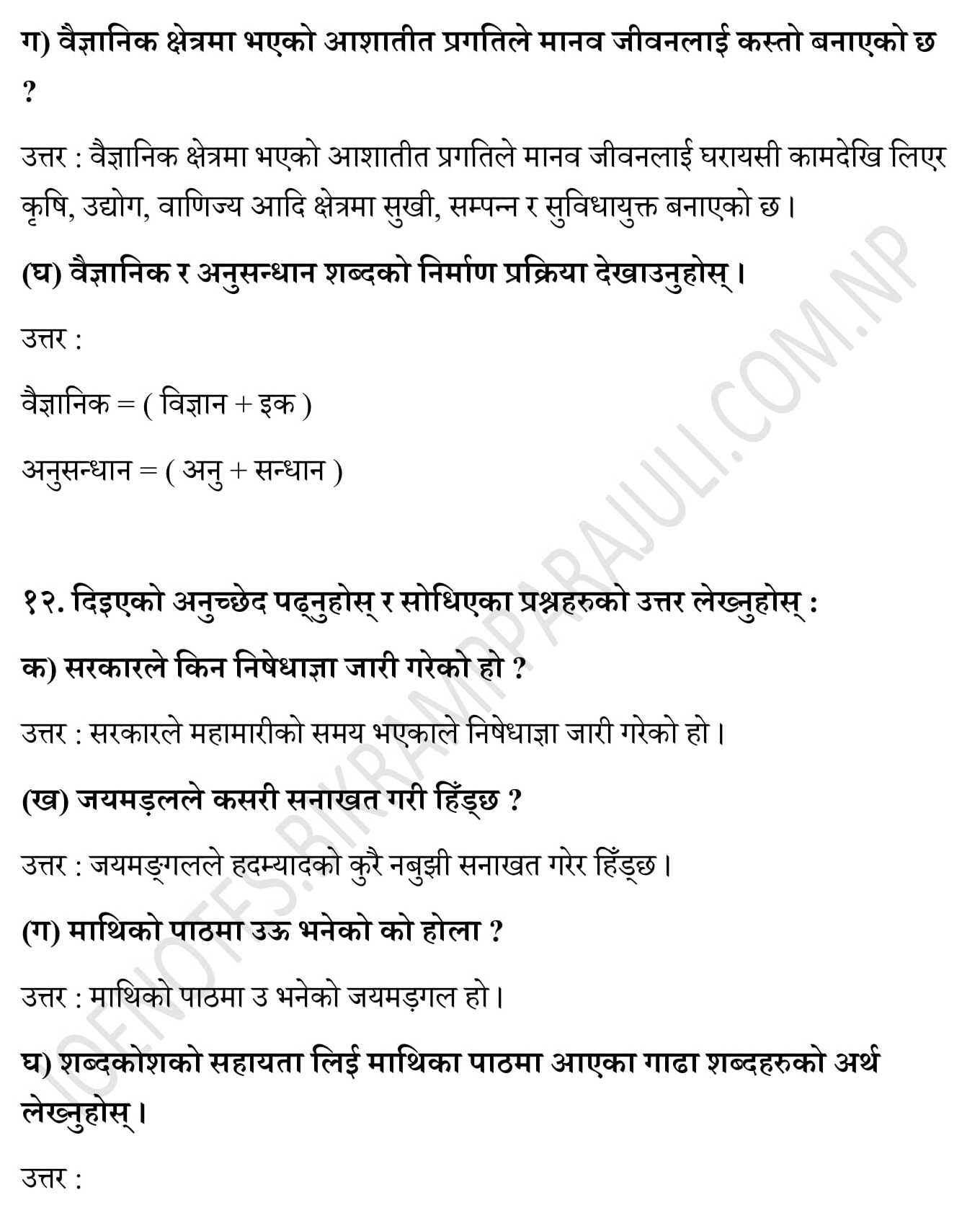 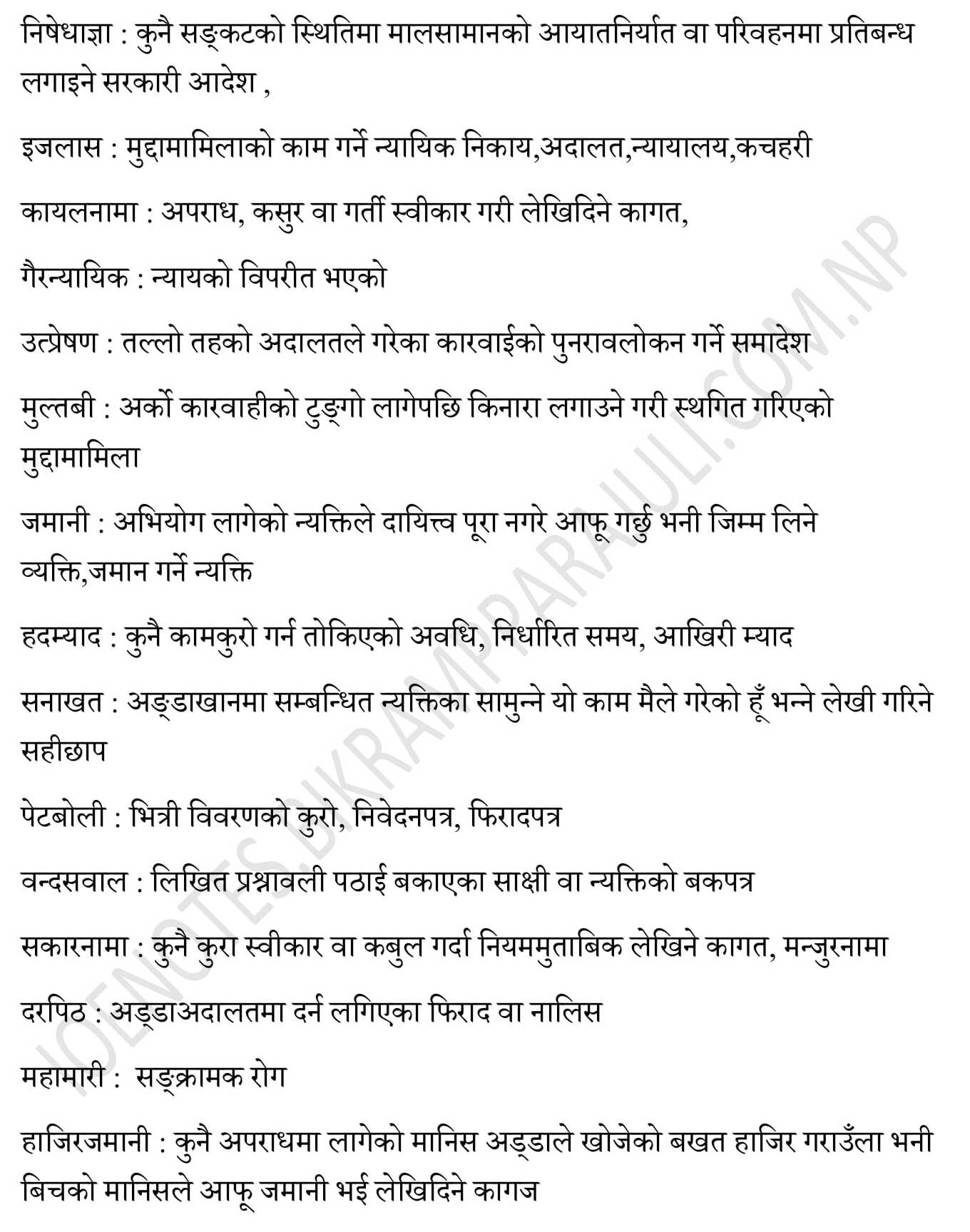 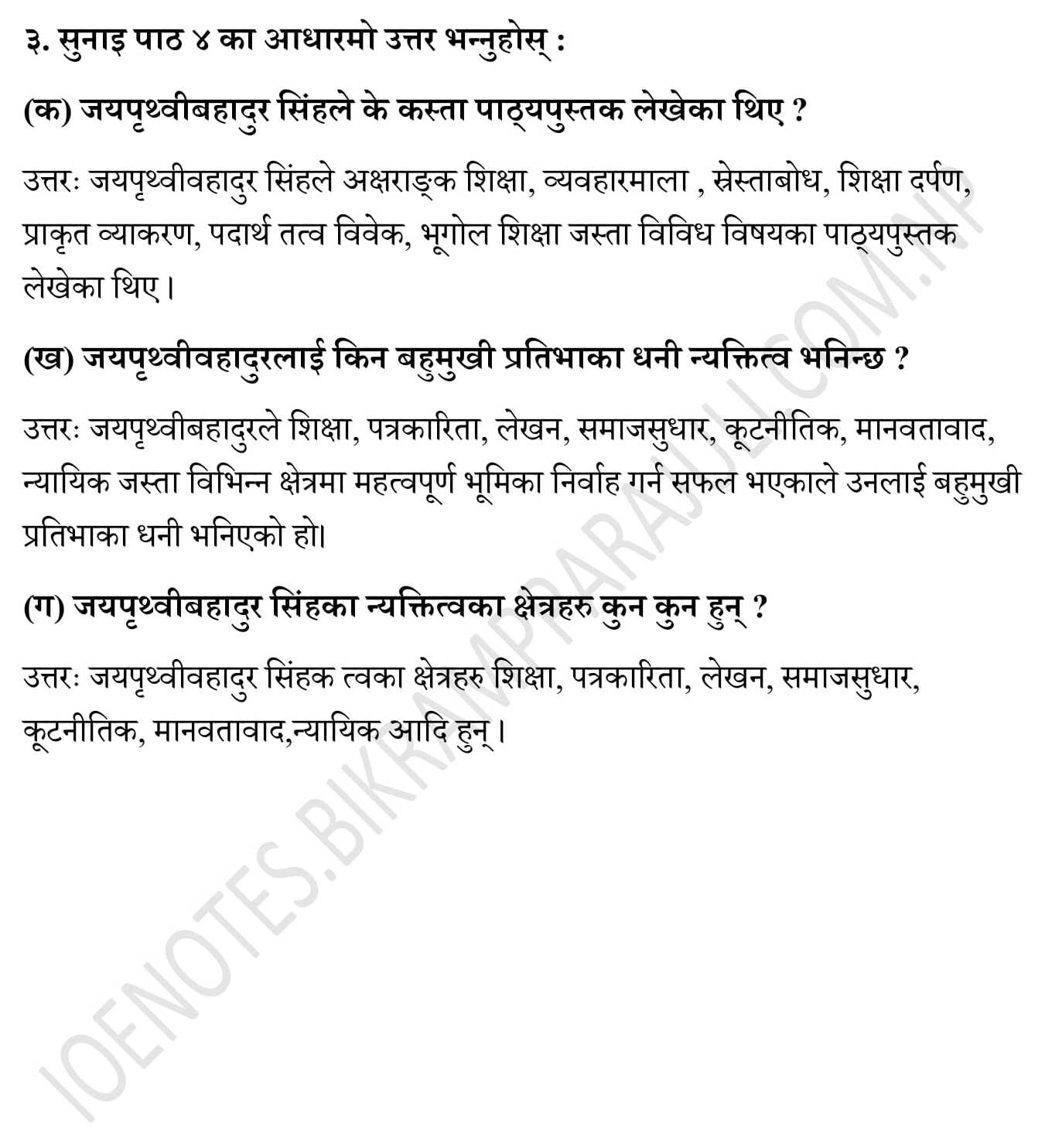 Date of birth: He was born in 1924 B.S
Birthplace: He was born in a small village called Simle in Nepal Danda of Bhojpur district.
Parents: Shrilal Neupane and Chandrakala Neupane.

She got married at the tender age of seven. She became a widow within two years of getting married without properly recognizing her husband. She was rejected by his family and society on the basis of his childish nature and qualities. That is why she was tortured physically and mentally. Thus enduring all forms of oppression, she remained at home until the age of fourteen.

Unable to bear the persecution of her mother-in-law and Nanda, she ran away. Even in Maiti, she was severely reprimanded for not being able to do anything in life. Attempts were made by his parents and relatives to bring her back to her own home. Thus the consciousness of rebellion gradually began to grow in the neglected Yogamaya from both the family and the home.

Due to her childhood experiences and the anomalies of the society in which she lived, she was getting rid of the lure of economic and social media. This sowed the seeds of asceticism in her. Encouragement was also awakened to give meaning to this consciousness.

Yogamaya played an active role in social activities such as worship and prayers. For this, she planned to do penance. He found his birthplace suitable for penance. Accompanied by her brother, she arrived in her hometown of Bhojpur. One evening in 1973 B.S, she arrived in Mazhuvabesi with her daughter Nanakala and brother. The arrival of Yogamaya in Mazhuvabensi became a matter of curiosity for the people there.
Being socially involved, she continued to participate collectively in home worship, Puranas, and Chautaris. She had the opportunity to apply the knowledge and experience she had learned in Assam. Based on this knowledge and experience, she started arguing with scholars and men in society.
Meanwhile, she reached Swargadwari of Pyuthan, took initiation, and became a monk. After becoming a monk, she had to give up her home environment, so she built a hut in Mazhuvabansi and started living there. As Yogamaya became a seeker of society through her knowledge and wisdom, her yoga practice was also aimed in that direction. She had the ability to give fluent discourses.
Due to this skill, people started flocking around her. Many people from around Bhojpur started coming to listen to his discourse and respect for her began to grow. The hut of Mazhuvabensi did not reach her as the devotees were exhausted. She moved to a large plot of land in Ufraulitar and built a hut for the devotees.
Wherever she moved, the devotees would reach there. She was also influenced by her yoga practice and penance. She used the methods of austerities such as fasting and snacking. To adopt her body to the weather and the environment, she would often sit half-submerged in the river Arun for several days. She used to heat Panchagni in summer.

Yogamaya's Rebellion (Contributing to Truthfulness and Equitable Society Building):
She had developed a rebellious consciousness due to his childhood experiences and the anomalies of the society in which he lived. She was also a staunch opponent of gender discrimination. She opposed child marriage but supported voluntary widowhood.
She vehemently opposed sati and slavery. She openly protested against all kinds of perversions in the religious, social, administrative, economic, and political spheres.

She considered untouchability to be the greatest stigma of human civilization. Even during such a harsh Rana period, she openly opposed untouchability and the caste system. She also put her ideas into practice by involving them in worship, adoration, hymns, kirtan, distribution of offerings, and eclipse. Many of his devotees were also alleged Dalits and all of them could engage in all activities without any discrimination. Seeing this kind of untouchable environment prevalent in his ashram, the so-called Sanatanis were very critical of Yogamaya.
She was overjoyed when the abolition of slavery was announced in 1982 B.S. She openly praised Chandrasamser's action. She was against the then judicial system. She condemned the practice of levying interest on the backs of the poor by Sahumahajan, the eldest son of the society.
In Yogamaya's view, duty is religion. She saw religion as human interest and emphasized equality. For this, she appealed to the rulers of that time and also sent people to beg for the true religion. That begging was limited to assurances. She was disappointed by this but decided to go to Kathmandu herself to turn that frustration into power. Going to Kathmandu She met Shri 3 Juddhasamser on the day of Mahanavami in 1993 B.S and asked him to fulfill the promise.
Juddhasamser reaffirmed his commitment, but after a long wait, the assurance did not materialize. This incident made him even more rebellious. On Saturday, November 27, 1994 B.S, the government announced that it would take Agni Samadhi along with all its devotees if they did not beg for the true religion. About 240 devotees volunteered for the cremation but the government did not allow his cremation plan to succeed. A day before the announcement of the cremation, a large army deployed from Dhankuta and Bhojpur laid siege and banned the cremation.
In the process, eleven people were imprisoned in Dhankuta, and Yogamaya and his female devotees were imprisoned for a few days at a party in Bhojpur. This was the first unique and adventurous revolt in history.
After the proclamation of Agnisamadhi failed, the revolt against asceticism in Yogamaya began to increase. Even at the age of seventy, she became more and more immersed in sadhana, meditation, and penance.
He had hoped to get 'begging for true religion' from the state but the Rana ruler did not listen to the voice of the rebellious woman. The rulers were irritated by the Agnisamadhi scandal. The autocratic state was becoming more and more oppressive and barbaric towards him. Proponents of the feudal system, the big Sahumahajans, like Yogamaya, rebelled and punished anyone who expected social change.

Meanwhile, as a rebellion against the ruler's neglect, Yogamaya secretly planned to take Jalasamadhi, and after all, those arrested in the Agnisamadhi scandal were released from prison, he went with his sixty-eight devotees. Before sunrise on July 7, 1998, she dedicated herself to the River Arun and took Jalasamadhi.

Yogamaya fight out a Nepali society with untouchability, exploitation, and corruption, and rebelled against the rulers. She tried to build a society free from sati, slavery, and untouchability through yoga, meditation, penance, discourse, and social behavior.
The leaders of the then feudal society did not listen to him. Despite being a conscious rebellion in the society, his ideas were not interesting to the people of old ideas. The contribution of Yogamaya, who led the revolt through mass Jalasamadhi after his views were not accepted by all quarters, and who made a unique revolution for the dream of integrity and egalitarian society, is indelible in the memory of human civilization.
Despite not having the opportunity to acquire formal education in this way, Yogamaya's life of developing social consciousness through yoga practice, penance, meditation, contemplation, and discourse has been unforgettable for building an ideal and civilized society.

What is the lesson to be learned from Yogamaya's biography?

Ans:Yogamaya is a powerful social reformer. She devoted her entire life to women's liberation and eventually sacrificed her body in the same Mahayagya. She sought out a Nepali society free of untouchability, free from exploitation and corruption, revolted against the rulers, and tried to build a just society free from sati, slavery, and untouchability.

It should be considered a great deed of Yogamaya to take the voice of Nepalis who have remained voiceless to the Rana government. Yogamaya seems to have made great sacrifices for the country as she ended up in Jalasamadhi carrying revolutionary ideas. In this way, we can learn from his biography that we will fight, not endure atrocities. We must engage in philanthropy. We have to end inequality, discrimination, etc., and join hands in building an egalitarian society.

If you have any queries regarding the Biography and Exercise or any other issue you are free to comment down below.