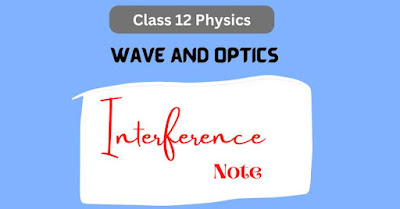 1. Define the Superposition of waves.

→ When two or more waves meet at a point, the resultant disturbance or displacement of the medium at that point is the vector sum of the disturbances caused by those waves taken individually. This is called the general principle of the superposition of waves.

2. Define the Interference of light waves.

→ When a source of light is single, the distribution of energy in a medium is uniform. But when there are two sources with the same wavelength and frequency having the same phase or with a constant phase difference, then due to the superposition of two waves, the distribution of energy in the medium is not uniform. Thus, when the two waves superimpose then the resultant amplitude in that region is different from the amplitude of individual waves. The non-uniform distribution of light energy due to superposition of light waves is called interference.
There are two types of interference. They are constructive interference and destructive interference.

**Scroll PDF**
Note: I hope you like the Notes on the Interference. If you have any unsolved problems related to wave and optics, you can comment down below. We will respond to your issues as soon as possible.