Class 11 English Trifles summary. Short summary of the one act plays english summary written by Susan Glaspell. The play is about an investigation. 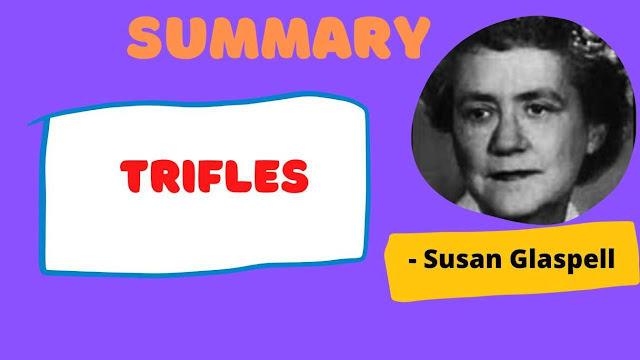 Character in the Play :

John Wright - He has been murdered

Summary of the play Trifles:

“Trifles” is a mysterious one-act play written by Susan Glaspell. The play is about an investigation related to the murder mystery of John Wright. This play is thematically complex. The main themes in Trifles are gender, isolation, and revolt for justice.

In this play, John Wright has been found murdered. Sheriff Henry Peters and county attorney George Henderson, together with the neighbors of John Wright, come to the Wrights' farmhouse to investigate the murder case. Mrs. Hale and Mrs. Peters accompany their husbands to Wright’s farmhouse. Mr. Hale needs to go there because he discovered the dead, hanged body of Mr. Wright the day before. The men are at the farmhouse to search for clues against Minnie, who has been imprisoned on suspicion of murdering her husband. The women are there to gather up some things needed for Mrs. Wright in the prison.

The men begin their investigation inside the house. Henderson questions Hale about the events of the previous day. Mr. Hale points out that he was going to town with a sack of potatoes when he stopped at the Wright’s farm to know if the Wrights would like to share a telephone line. He found Minnie in her rocking chair behaving strangely. She told him that John was upstairs, dead, with a rope around his neck. At the time, Minnie claimed that John was strangled (choked) in his sleep by an unknown assailant and she did not hear the strangling, because she "sleeps sound." Mr. Henry Peters, Mr. George Henderson, and Mr. Hale enter the kitchen. They are followed by Mrs. Peters and Mrs. Hale. The condition of the kitchen is messy, all the things are shabby and abandoned. The attorney inspects some broken jar preservatives in a cupboard that have made it so messy. The males ridicule Mrs. Wright for being “a poor housekeeper” worried about ‘trifles’. The women don’t like such insulting remarks of males. They consider the kitchen as an unimportant place to search. Sheriff Peters says they should focus on the bedroom and the barn (store), where, they assume, the real clues will be found. While the men go upstairs leaving the women in the kitchen, they conduct the real investigation. As soon as they are alone, they begin gathering things to bring to Minnie in prison: a change of clothes, a shawl, a pleated apron. This leads them to some important discoveries.

First, the women find the dull and shabby clothes of Minnie. Mrs. Hale says that she used to wear pretty clothes and be lively before marriage when she was Minnie Foster, a popular singer. She means to say that marrying John ruined her fantastic life. Wright was an abusive, hot-tempered man and forced Minnie to wear boring house clothes instead of the pretty clothes she likes. This is the first indication that Minnie was unhappy with her controlling husband. Then there are the little things: the bread left out to get stale, the table only half-cleaned, a quilt with crooked, irregular stitching that reflects Minnie's mental state that she was so upset in her life. Their suspicions are confirmed when they find the final, most important clues: a broken birdcage and a dead canary bird in a beautiful red box. They notice the wrung (squeezed) neck of the bird. They connect Mr. John wright’s murder to Canary’s death. It is likely that John broke this birdcage, and killed the bird. He might not have liked the singing of birds. Minnie has been keeping the canary in a sewing box, wrapped up in silk-like a treasure. It means the canary was the most valuable thing in her life. This bird is symbolic of Minnie herself, who used to sing in the town's choir married.

Using these clues and their own past experience, the women come to the conclusion that Minnie snapped at her husband when her angry husband killed her lovely pet canary. The cruelty of her husband was beyond the limit. She retaliated (took revenge) against him after years of abuse and hanged him, mirroring the way he twisted her canary's neck. They decide not to tell the men what they know because they realize the men won't understand what drove Mrs. Wright to such extreme, what they say ‘a justifiable homicide’. Both of them have come to sympathize with Minnie when they come to understand why she murdered her abusive husband.

"This is the One Act Plays ( Trifles ) written by Susan Glaspell. In this article you will find the short summary of the plays which is useful for the class 11 NEB student. You can give feedback in the comment section. We will implement further in the upcoming article."