Class 11 Civil Peace summary of English book which is written by Chinua Achebe.The story is published in class 11 NEB Syllabus of Nepal. 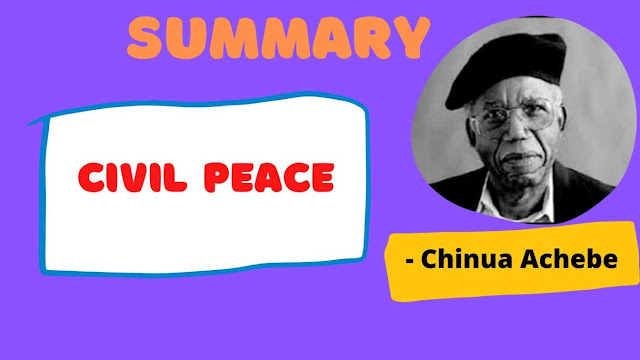 “Civil Peace” is a short story written by Chinua Achebe, a famous Nigerian novelist. In this story, the writer has depicted the effects of the Nigerian Civil War on the people, and the realistic picture of the post war society.

Jonathan Iwegbu, the protagonist in the story, thought himself very lucky because he had experienced many miracles in his life. Even after the devastating war, he had come out with five inestimable blessings- he himself, his wife, and three children out of four. He considered five of them to be five blessings. He was happy to find two miracles – his still- working bicycle and still- standing home. He almost had lost the bike during the war, when an army officer dressed in rags attempted to grab it. After paying two pounds, he had been able to get his bicycle back. Jonathan buried the bicycle for safe-keeping in the same place where his son and other casualties (dead bodies) from the camp were buried. After the war, he retrieved it, still in good condition.Thus, to find him -self and four members of his family safe even after the devastating war, he considers himself lucky and blessed with good luck. He is very happy to find his house and bicycle in good condition.

The war had just ended and it was the time of Civil Peace. The whole country of Biafra was in the process of reconstruction. Jonathan, using his bicycle, started a taxi service. He soon accumulated 115 pound in a fortnight and returned to his hometown, Enugu, with his family. There, they found their house still standing. Though it was small and hand-constructed from zinc, wood, and cardboard, it had relatively remained safe whereas most of the surrounding bigger buildings had been destroyed. He had his house repaired by hiring a poor carpenter. Then they started living in the house and did hard struggle to be settled. His children picked mangoes to sell to soldiers’ wives, while Maria made breakfast cakes (akara balls) to sell to the neighbours. Jonathan himself opened a palm-wine bar for soldiers and other people with money. He occasionally visited the Coal Corporation, where he had worked before the war, but it showed no signs of reopening.

One day, after turning over rebel currency, Jonathan was given an award of 20 pounds, which he considered as egg-rasher. He was highly alert not to be robbed, remembering a theft he had observed several days earlier, in which a man broke down shamefully in public. That night, a group of thieves knocked on his door demanding money. Being frightened, the family called for the neighbors and police, but no one came to help them. The thieves then mocked them, crying out even louder to indicate how helpless the family was. The thief leader demanded 100 pounds, promising not to hurt Jonathan or his family if he cooperated. Eventually, Jonathan realized their lack of options, and gave the thieves the 20 pounds of reward money. Then they left the family unharmed. Some thieves had insisted that they should search the house for more, but the thief leader believed this was all Jonathan had, and accepted it.

The next morning, neighbours visited Jonathan family to express their sympathy. They found the family already hard at work preparing for the day -Jonathan holding a wine jug to his bicycle, Maria cooking breakfast cakes, and his son cleaning old wine bottles. It looked as if nothing had happened. Jonathan told his neighbours that the loss of the egg-rasher money was nothing to him, as he had lost much more than that in the war. He continued his work saying, “Nothing puzzles God”.

In this way, "Civil Peace" shows a society struggling in the aftermath of the Nigerian Civil War. The story is focused on the protagonist Jonathan Iwegbu and his resilient behaviour. By accepting both gains and losses without losing hope or determination, Jonathan serves as a model for the reader.

"This is the short Stories( Civil Peace) written by Chinua Achebe. In this article you will find the short summary of the story which is useful for the class 11 NEB student who are reading in Nepal. You can give feedback in the comment section. We will implement further in the upcoming article."