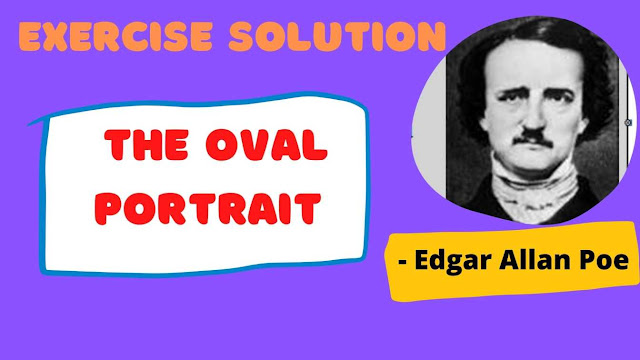 Reference to the context
a. What is the central theme of the story? Who is the woman depicted in the oval portrait?
-> The central theme of the story “ The Oval Portrait” is the relationship between life and art. This story has shown that the intense love towards art can lead to both destruction and development both. The painter could make a beautiful portrait of his wife but the wife became a victim of an obsession with her husband. So anything intense close to anything can cause destruction.

b. "The Oval Portrait" is a short horror story by Edgar Allan Poe involving the disturbing circumstances surrounding a portrait in a chateau. Elaborate.
-> Yes, the story involves the disturbing circumstances surrounding the portrait in a chateau. The darkroom, other paintings, tapestry, armorial trophies on the wall sound to be really gothic (fearful). The book is kept under the pillow and the oval portrait shadowed behind the candelabrum adds to the description of horror intensity. Even the story contains about the painter and his wife`s death. All these events make the story horror.

c. "The Oval Portrait" suggests that the woman's beauty condemns her to death. Discuss.
-> After reading the story, “ The oval portrait “it seems like the woman`s beauty condemns her to death. The painter`s wife had the rarest beauty and the painter wanted to paint her beauty on the oval portrait. The painter got more obsessed with his painting than his wife`s health condition. Nor did she resist her husband`s will but let things go on instead. After several weeks by the time the painting was over, she also died.

d. Discuss the story as a frame narrative (a story within a story).
-> There`s a frame narrative in the story. That means there`s a story within a story. At first, there`s a story of an unnamed narrator, who makes a forcible entrance with his valet, Pedro. He roams in the rooms, finds a book of painter`s life story, happens to notice the oval portrait of a young girl. The other story comes from the book the narrator reads of, which anecdotes how the young girl loses her life for her husband`s painting.

e. The story is told in a descriptive style, with plenty of imagery and symbolism. Which images and symbols do you find in the story?
-> In the story, I find the images of dark scenes when the narrator and his valet, Pedro forcibly enter the recently deserted chateau in the Apennines. Similarly, there are images of paintings, tapestry, armorial trophies, candelabrums,s and the oval portrait itself. I honestly say find the symbol in the oval portrait because this portrait symbolizes “ life and art “. The painter was fond of his painting (art) which makes his dead wife`s life immortal in an artistic form.

f. What does the expression “She was dead!” mean?
-> The expression “ She was dead “ means the shocking moment of death of the painter`s wife on the chair. The painter was quite obsessed with his painting that he forget to inspect his wife's condition. He kept on painting his wife`s portrait for weeks. When he turned his painting towards his wife being happy, he found his wife dead. Here, the artwork took the life of its main subject.

Reference beyond the text
a. Do you think there is life in art?
-> In a literal meaning for the common people, there`s no life in art because the art doesn`t speak, and act out but on a deeper level, there`s life in art because the art makes life sound, animated, and realistic. For example, in the story,” The oval portrait”, the portrait of a young girl tells the narrator much more things about her than her living presence. She was already dead but her painting shows her history.

c. A more intense look at the painting reveals the illusion. Have you noticed any such painting?
-> It`s said that the portraits have the power to connect us with other humans through the face. So, it`s obvious that a more intense look at the painting reveals the illusion. Yes, I have recently noticed a painting called “Mandala”, a Buddhist painting. There were multiples circles and other geometrical forms in numerous colors. They try somehow to show a connection of body and souls of the world, while I got lost om finding out the reference of Enlightenment the Buddha got with those enchanting forms.
Also Check :
God Sees The Truth But waits Question Answers
Disclaimer: This website is only for educational purposes. If you have any questions regarding the content and error you can message us on our Facebook page.