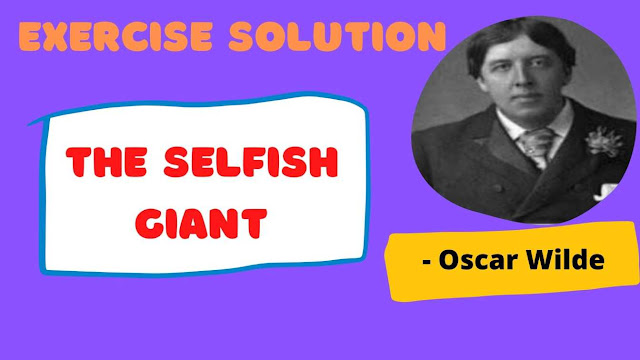 The Selfish giant was written by the Oscar Wilde. He was born in 1854 and died in 1900. He was an Irish Poet and novelist. This is a story about a giant who learn to love and Sharing.

Answer the following questions.
a.    Where did the children use to play?
-> The children used to play in the giant's garden.
b. What did the Snow and the Frost do to the garden?
-> The snow-covered up the grass with her great white cloak, and the Frost painted all the trees silver.
c. What did the giant hear when he was lying awake in bed?
-> The giant heard some lovely music when he was lying awake in bed.
d. Why do you think spring season never came to the giant's garden?
-> I think spring season never came to the giant`s garden because he forbit`s children to enter in his garden.
e. How did the giant realise his mistake?
-> The giant relaised his mistake when he saw the children playing in his garden and coming of spring in his garden due to the children.

A. Read the extracts given below and answer the questions that follow.
a. “How happy we were there!” they said to each other.
i. Where does ‘there’ refer to?
-> “There” refers to the giant`s garden where children used to play after school.

ii. What does ‘they’ refer to?
-> “They” refers to the children who used to come and play in Giant`s garden after school.

iii. Why are they saying so?
-> They are saying so because they aren`t allowed to play in the garden anymore. The giant has chased them out of his garden being furious.

c. When the little child smiled at the Giant, and said to him, "You let me play once English: Grade 11 199 in your garden, today you shall come with me to my garden, which is Paradise," shortly afterward, the happy giant dies. What is the coincidence of this event? Describe it in relation to this fairy tale.
-> As the Giant was growing up old and feeble. He could not lay about anymore, so he sat in a huge armchair, and watched the children at their games, and admired his garden. “ I have many beautiful flowers”, he said, “ but the children are the most beautiful flowers of all”. And the Giant helped the little boy/child to climb p the tree and the child became happy. As the child was a (former god) almighty.
Hence, the coincidence of this event was due to the small child called the former god almighty.

B. The story makes use of personification as one of the main figures of speech. Cite three examples of personification from the story. What is the significance of the seasons personified in the story?
- i) Flower
The children are the most beautiful flowers of all.
ii) Head
-    Part of the human body.
iii) Northern wind
-    He was wrapped in fog and chimney.
iv) Anger
-Showing aggressive behavior.
v) Autumn(season)
- It is the golden season of all seasons but the Giant didn`t get it to experience.


C. This story can be read as a fairytale, where the children, the seasons, the tree, the corner of the garden, the snow, the wind and the frost are all used as symbolism. Interpret those symbols.
-->  i) The children
- ( God ) Most beautiful flowers of all (happiness).
ii) The seasons
-  Change in our life; no any event in our life because everything is changeable.
iii) The tree
-  It symbolizes the beauty of nature which makes the garden beautiful. Hence, tree bear flowers too.

iv) Paradise
-  Heaven.
v) The snow, The wind, and the frost
- It symbolizes the pain and suffering of the person.
vi) The corner of the garden
-  It symbolizes suffering, pain, difficulty, and the complexation of human life.

D. Which figure of speech is used for ‘winter, frost, snow, north wind, hail and little child’? Who is the little child compared to?
1) ALL
- It was always wintered there, and the Northwind, and the Hail, and the frost, and the Snow danced about through the trees.
2) Tree
- The poor tree was still quite covered with frost and snow, and the Northwind was blowing and roaring above it.

a. What is the main theme of this story?
-> The moral lesson or main theme of the story “The Giant“ is that True love and kindness bring smiles to our faces. We should love true to all and help kindly. A kind person and helpful behavior make people live longer. We can be happy with helping others which is only possible through true love then only we will get satisfaction.

b. Does God punish those who are cruel to children and very selfish?
-> Cruel means, not a helpful person who may be rough hood, savage, and vicious.
No, God does not punish those who are cruel to the children and very selfish because god is friendly to all their children. God forgive all their child for 1-2 times because he/she is repeating his/her cruelness and selfishness more times.

Hence, God forgives those good (god) devoted and who are on the right track, helpful, true lovers, and cooperative people but God may punish that wrongdoing person.
Also Check :
The Oval Portrait Exercise Question Answers
Disclaimer: This website is only for educational purposes. If you have any questions regarding the content and error you can message us on our Facebook page.