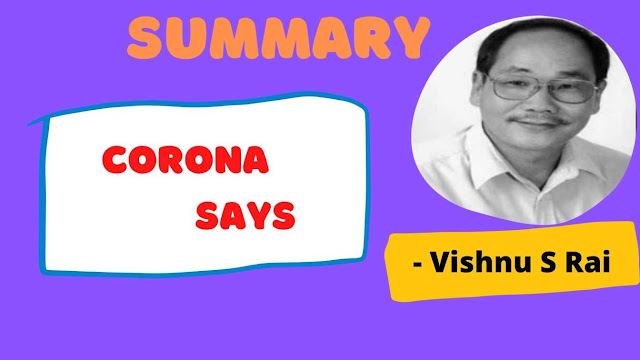 The author of the Corona says is Vishnu S Rai. He is Well known Associated Professor of English. He was born in 1951 in Sunsari Nepal. He was educated in Nepal, India, and Uk and has completed his Ph.D. from the University of Bern, Switzerland. He has written Corona says poem on the present theme of Coronavirus which has a bad effect on human beings.

There are altogether seven different stanzas here in the poem. In the very beginning, we find the speaker asked the men to stop cursing him. He denies coming to this planet of his own free will and even taking thousands of lives and destroying the world's economy. He claims that he was invited without having his choice by human`s bad conduct and attitudes towards nature. Here, the speakers calculate dead people and even blame humans for their destructive wars and their bad impacts.

Later on, the speaker blames humans for their useless arrogance. He states that the people on this earth think of themselves as the crown of creation. Due to this arrogance, they are treating other creatures as their servants. The speaker raises the value of all the creatures as birds in the sky, creatures of the sea, creeping insects of the land, sources of life, etc on the planet.

Due to all these bad activities of humans, the earth itself is feeling the burden. The speaker makes all humans realize the clean sky without dust and smoke after their arrival on the earth. He has shown the mirror of reality to all the humans saying about the feeling of caged animals in the zoo. This is similar to the trapped life of humans during the lockdown. He claims that he had come to provide little rest to the mother (earth).

The speaker adds that the mother (earth) belongs to everyone, not only the human. Finally, he warns humans to get rid of egos otherwise many other speakers come here on this planet and humans have to return to the cave again like before.

"This is the Poem ( Corona Says ) written by Vishnu S Rai. In this article you will find the short summary of the Poem which is useful for the class 11 NEB student. You can give feedback in the comment section. We will implement further in the upcoming article."