The fairy tale “ The selfish Giant” was written by an Irish Poet, wit, novelist, and playwright Oscar Wilde. The story is about giant who was selfish 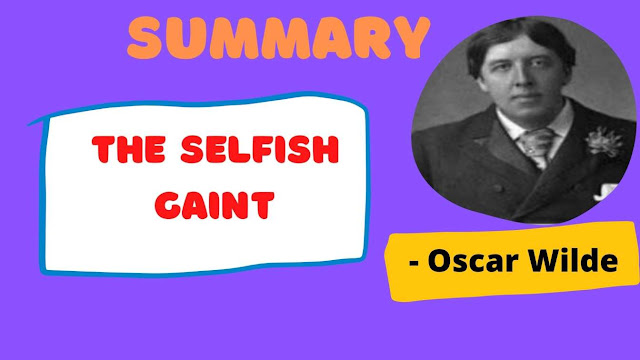 Background of the Author :

Summary of  " The Selfish Giant "

The fairy tale “ The selfish Giant” was written by an Irish Poet, wit, novelist, and playwright Oscar Wilde. The story is about a giant who was selfish in the beginning and learned the importance of love, care, and sharing from the children. The innocence of children converted him to be kind and generous at last.

There was a beautiful garden that belonged to a giant. The children used to come to the garden in order to play after their school was over. The garden was very beautiful with soft green grass, flowers, peach, trees, birds, and other lovely trees. The children were very much delighted as the flowers, birds, and trees welcomed them.

However, their happiness could not continue for long, when the giant came and scolded telling them that the garden belonged to him. He built a wall around the garden and put a notice saying "Trespassers will be prosecuted". The children became very sad as the trees, flowers, and birds stopped laughing because of the cruelty of the giants.

The spring was disappointed with the giant, so it don't come to the giant's garden. The snow, the frost, north wind, and the hail came to the garden and danced freely. The hail destroyed the roofs and the slates of the building. The giant wondered why the spring season did not come. Even the autumn did not come. Even the autumn did not give fruits to the giant's garden. one morning the giant heard beautiful music from a small bird. The children entered the garden through the small hole in the wall and started playing. There was spring season in the garden except for a corner of the garden where a little child was crying. He wanted to climb up the trees but could not. The trees bent their branches but he was too small to reach the branches. When the giant saw those things, his heart melted, and decided to go to the child to help him climb up the tree. The giant realized that it was because of him, the spring did not come to the garden. He knocked down the wall and allowed the children to play in the garden.
The giant was surprised that he did not see the child the next day. When he asked other children they informed him that they did not see him before. The time passed, the giant became old and sat in an armchair. one day he saw the same little child in the corner of the garden and went to near him. The giant became aggressive when he saw the wounds on the child`s palm and feet. The child told him that they were the wounds of love. The giant knelt on the child`s feet and apologized for his mistake. The child told him that he is happy because the giant gave him the garden to play in. Now he wants to take the giants to heaven.
Also Read :
Class 11 The Oval Portrait Summary
Disclaimer: This website is only for educational purposes. If you have any questions regarding the content and error you can message us on our Facebook page.