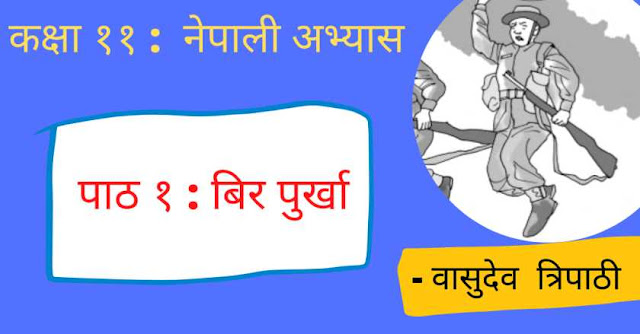 Bir Purkha is a Poem ( Kabita ), New Syllabus in the Class 11 Nepali Book. The writer of the Poem is Basudev Tripathi. The poem describes the Nepali warriors who fought with great bravery.
Next : Gauko Maya Class 11 Nepali Exercise 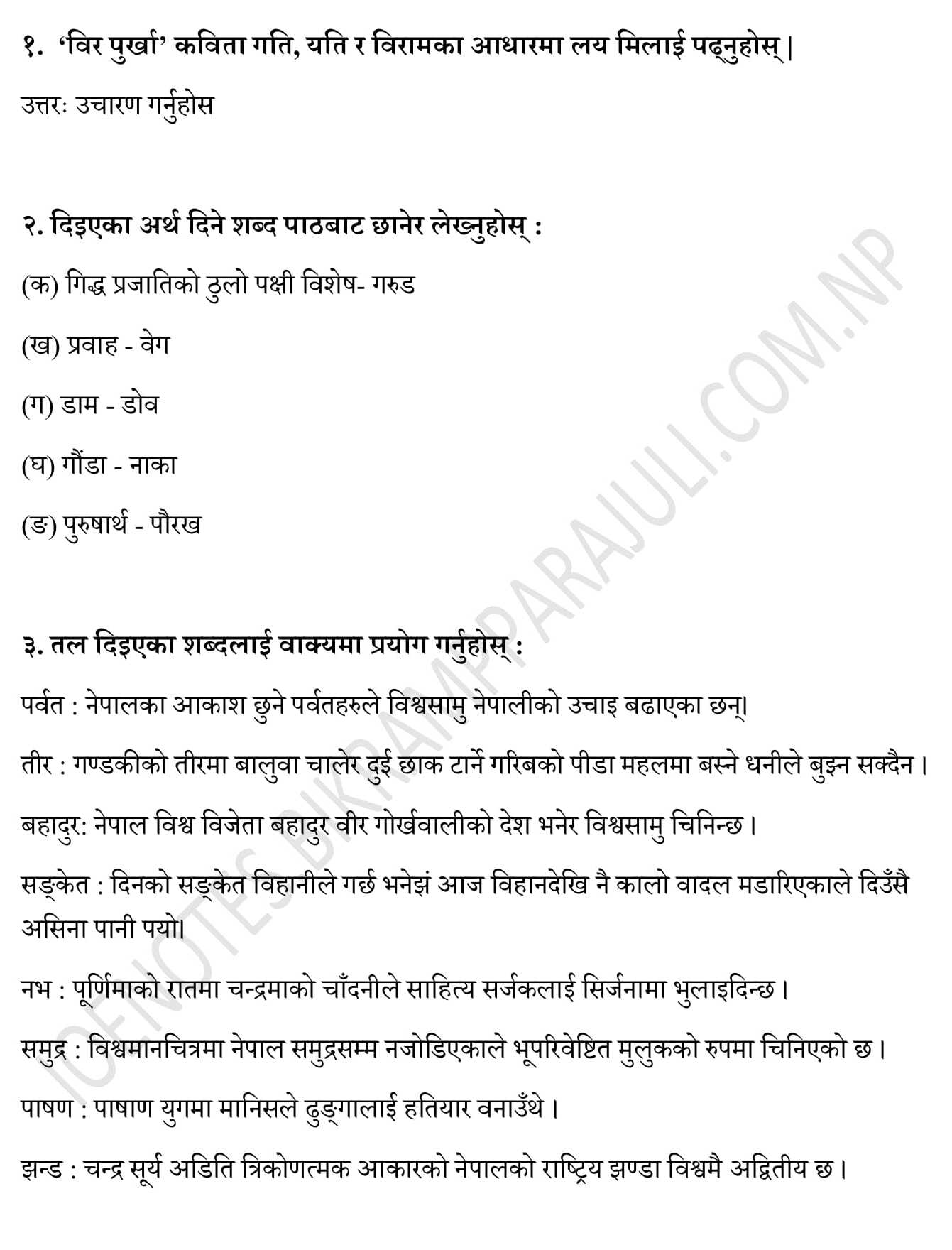 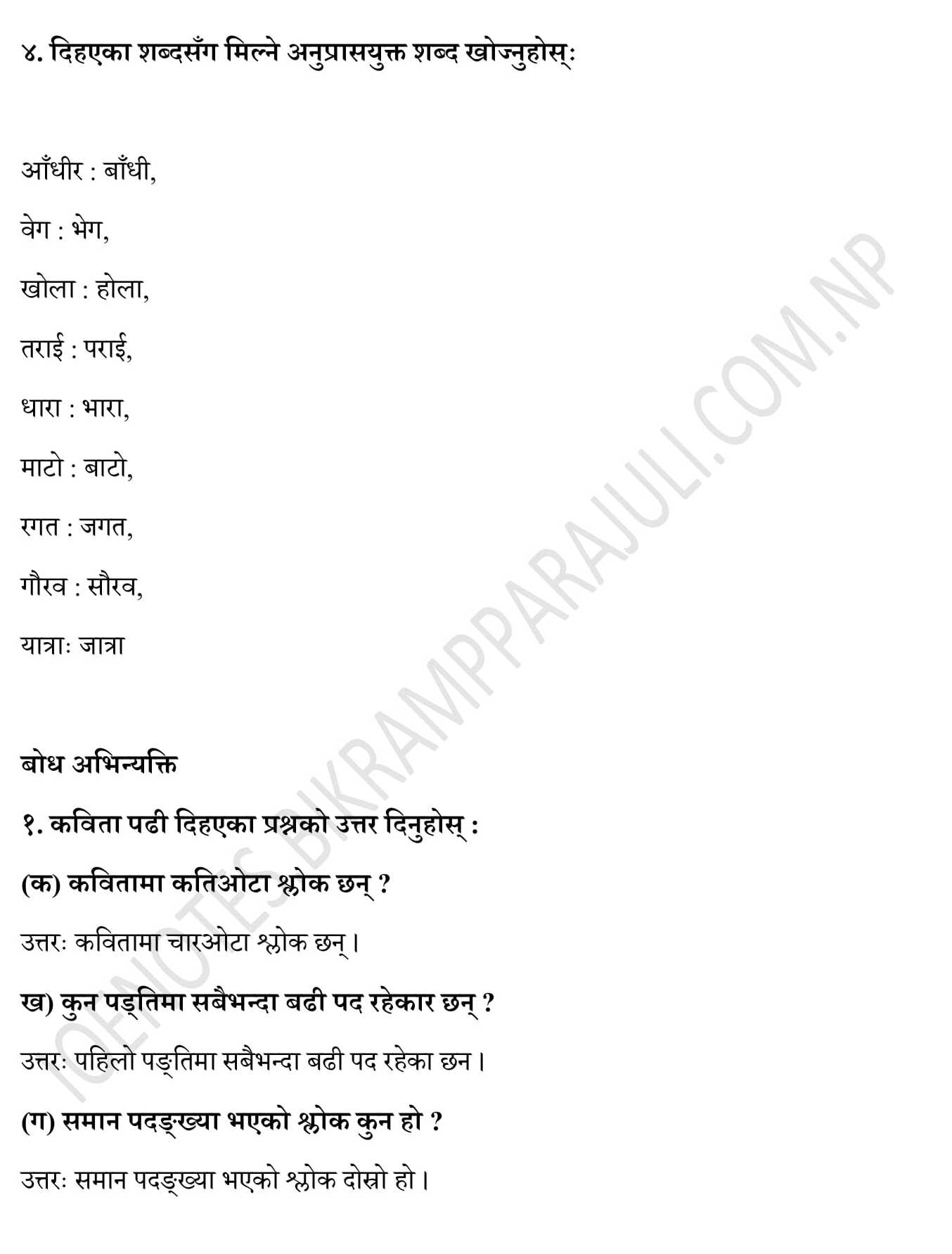 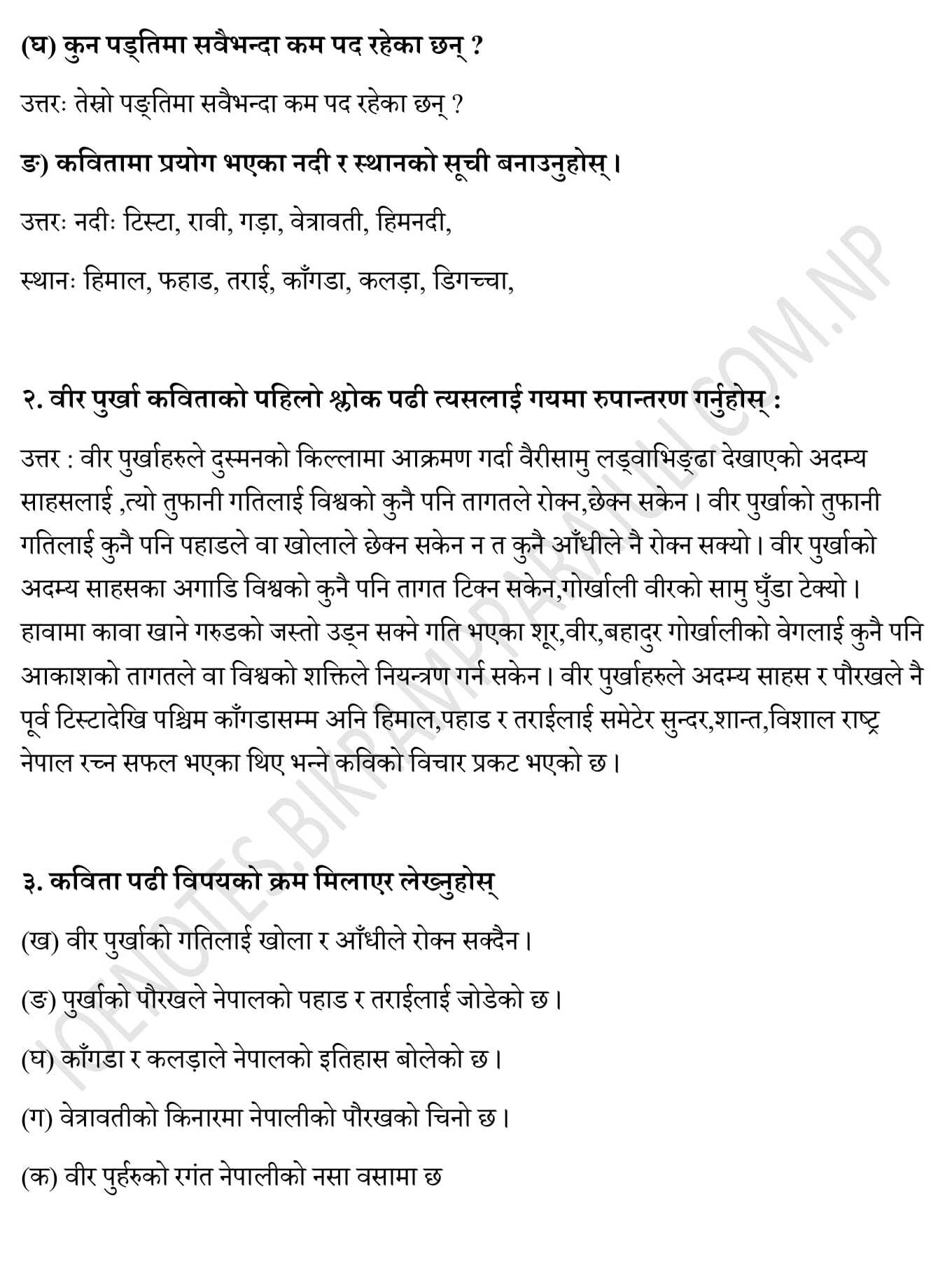 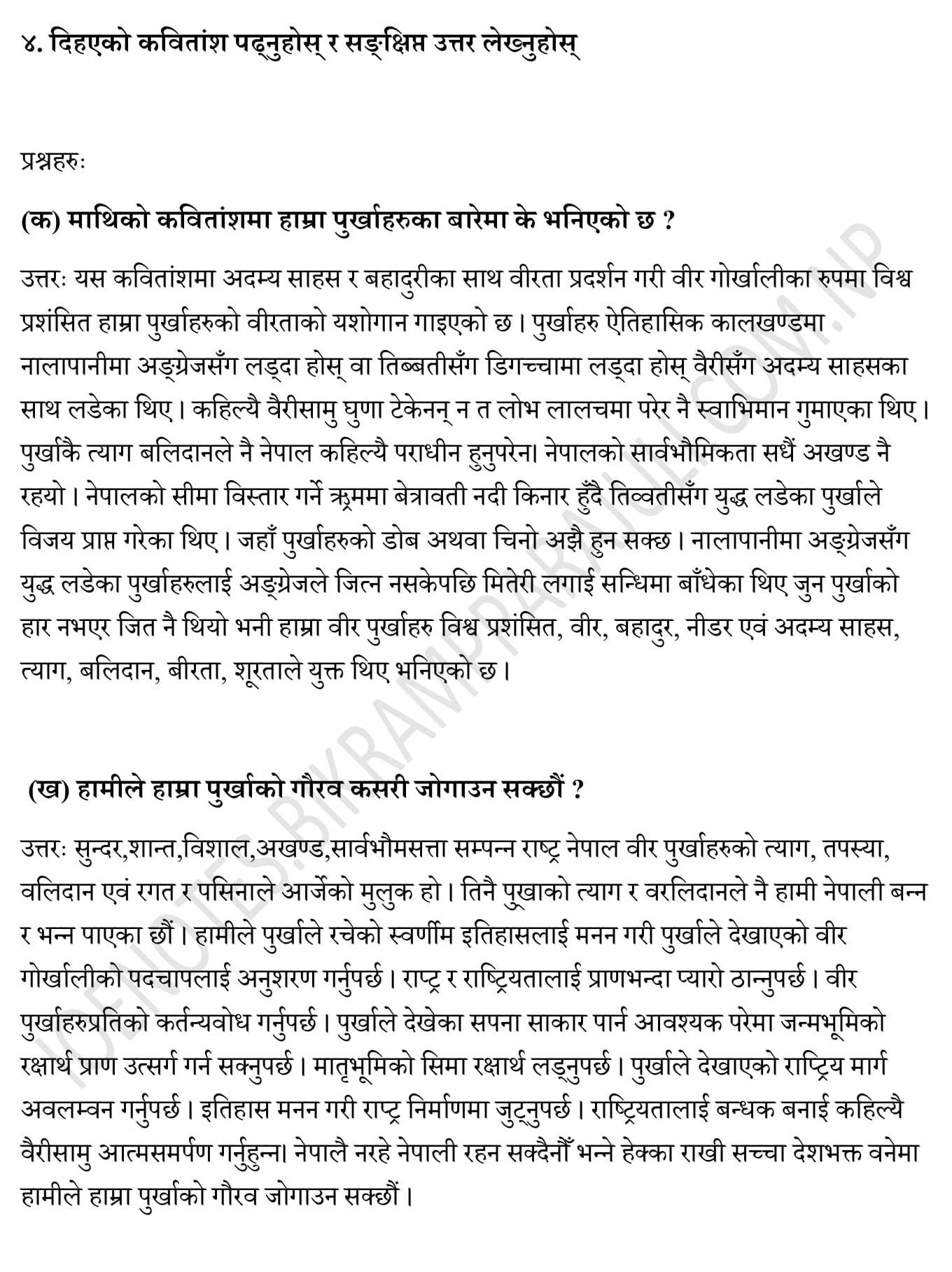 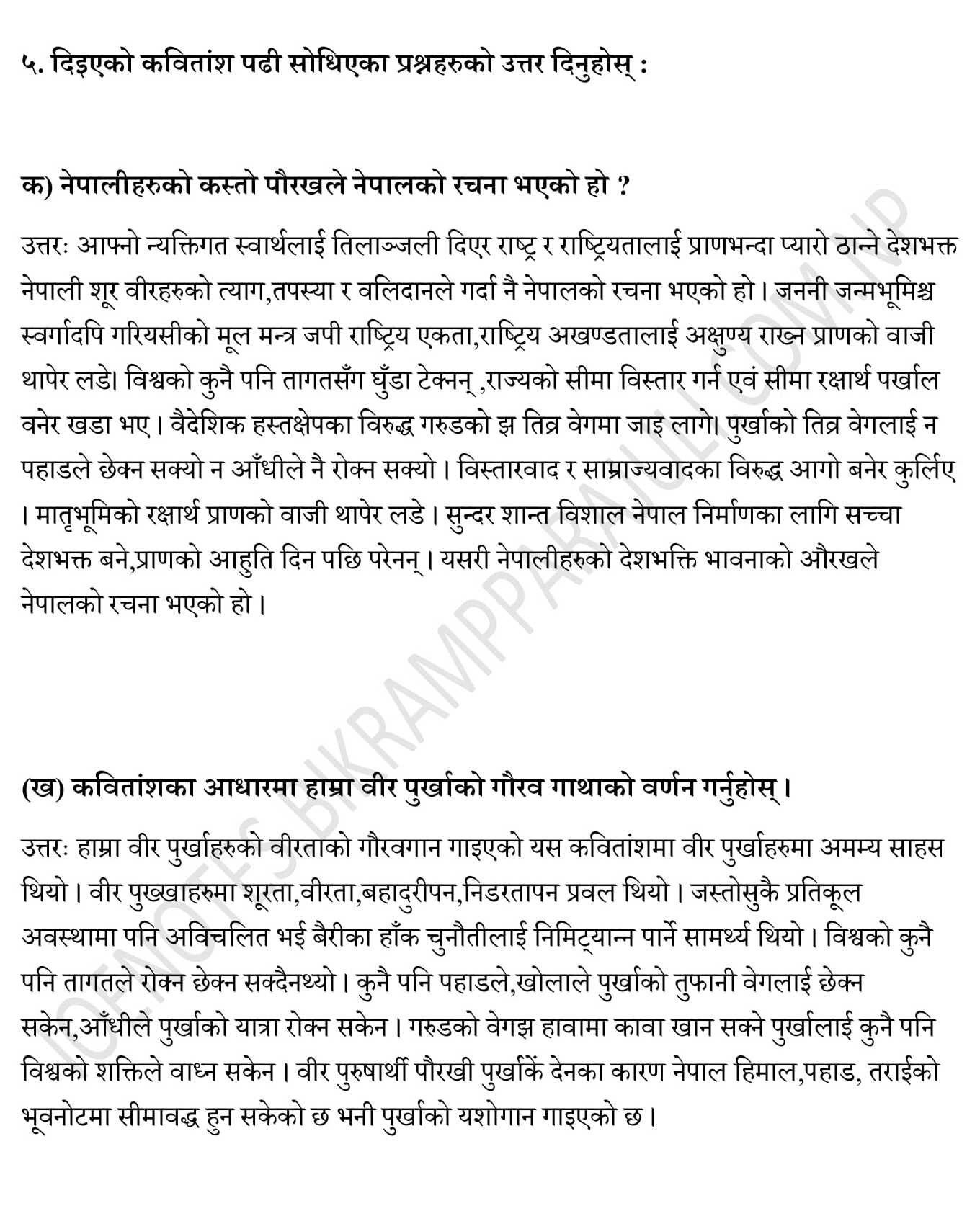 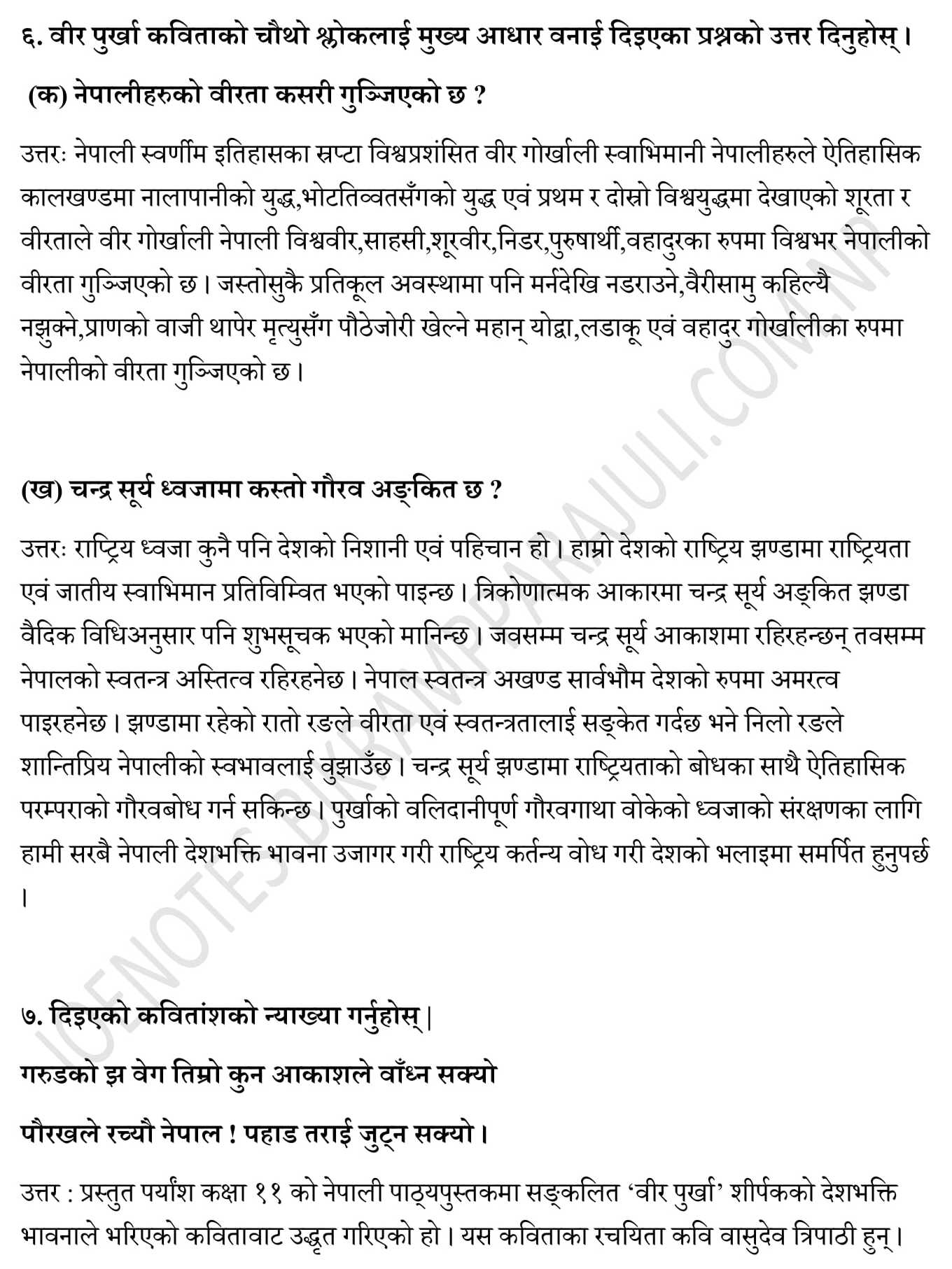 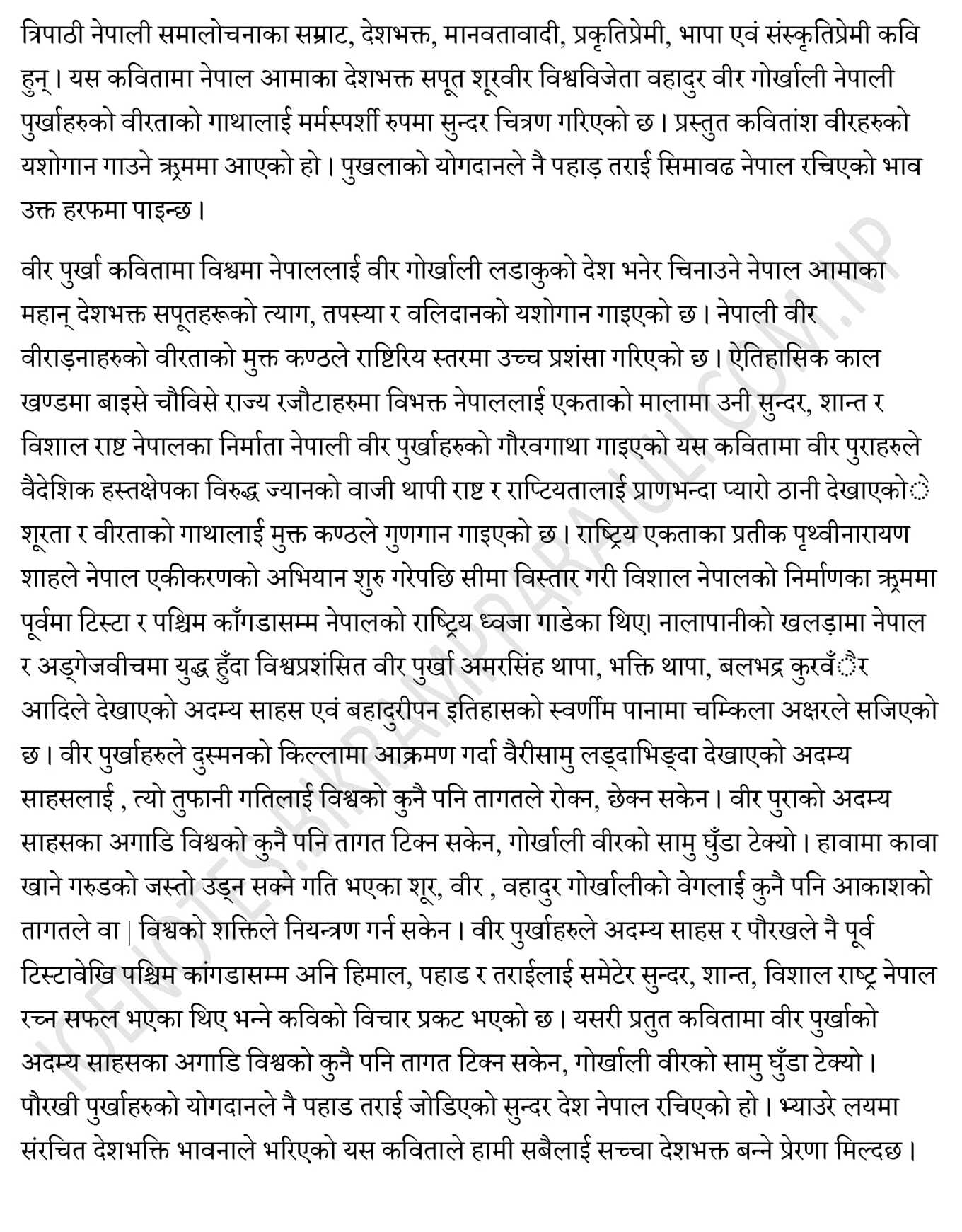 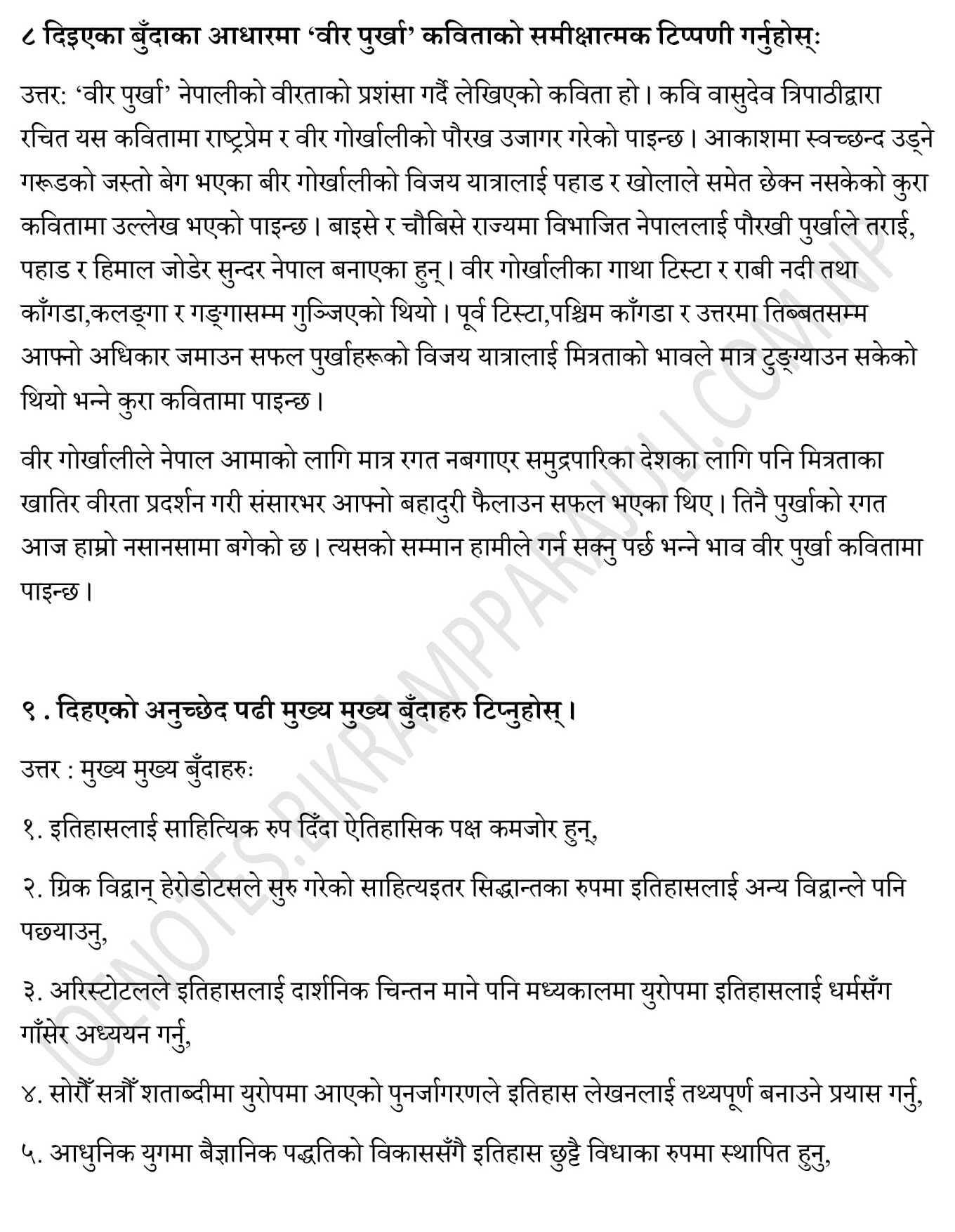 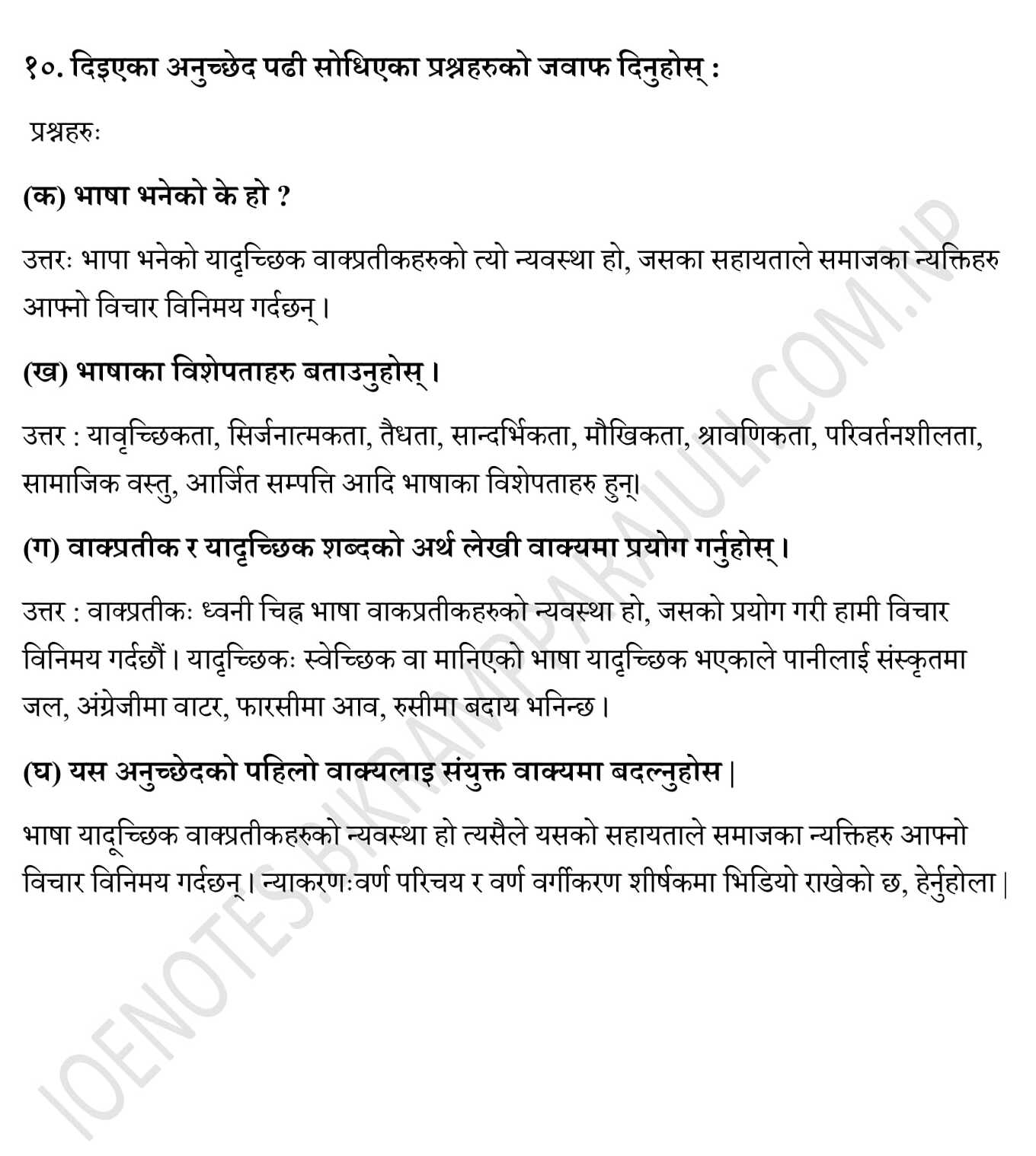 He has made a significant contribution to the development and expansion of Nepali literature by publishing dissertations such as Lekhnath Poudyal's Analysis and Evaluation of Poetry (2033), Sanatan Relevance of Hindu Nation Nepal (2065), Choose Life (2052), Nepali Poetry Part 1 and 2 (2046).

Vasudev Tripathi's poem 'Bir Purkha', which started his literary journey in 2017 BS with a poem titled 'Yo Duniya Yastai Ho' in Himal Patrika, is also an excellent poem based on historical background.

Summary of Bir Purkha Class 11 Chapter 1:
Poet Vasudev Tripathi's poem 'Bir Purkha', composed with historical themes in mind, commemorates the heroic martyrs who sacrificed their lives for their nationality. Nepal's borders can be considered an excellent poem praising the heroic ancestors who rose above their personal interests for the sake of sovereignty and integrity and worked hard for the country.
The poem depicts the history of Nepali heroes who fought for the national interest of the country only, despite the lack of resources, highlighting the goodwill towards the martyrs who contributed to the building of a beautiful, peaceful and independent nation by uniting the hills, terai, and mountains.

The poet's intention seems to be that the Nepali heroic ancestors who succeeded in expanding the Nepali land from Tista in the east to Kangda in the west also remember the land of Larde and the rocky soil there. Respect has been expressed to those heroic ancestors who fought for the borders and nationality of the country even though they were barefoot and barefoot, crossing various hills without sacrificing their lives during the construction of Greater Nepal.

"Veer Purkha" is an excellent poem about the courage, sacrifice, and heroism shown by our heroic ancestors in the unification of Nepal divided into different states and the heroic heroes who fought fearlessly with the British who crossed the border of Nepal.

There are four verses in this poem written in Zhaure verse. Patriotic poet Vasudev Tripathi pays homage to the heroic ancestors who fought unwaveringly and fearlessly for Nepal's border defense, Nepal unification, and Nepal's independence in the midst of various geographical, social, and economic difficulties.

Expressing the feeling that Nepal is an independent, sovereign nation due to the contribution made by Nepali heroic ancestors, the central theme of the poem is to remember and pay homage to the heroic ancestors. They succeeded in introducing the national flag of Nepal to the world.

The essence of this poem is to try to awaken the spirit of national consciousness by exposing his dormant feelings in the Nepali psyche.

Some sayings about Bir Gorkhali:
1. Ma Bagh ko Damaru hu, malai sino khane kukur nasamjha
2. German Chancellor Otto von Bismarck: I can fight my country's armies with the armies of any country in the world, but my heart trembles when I hear of the Gurkha army.
3. German Ruler Hitler: If I had a Gurkha army, no army of any country could defeat me.
4. Indian Army Chief Sam Maneks: If a person says he is not afraid of dying, he is lying or he is a Gurkha.
5. Osama bin Laden: If I had a Gurkha army, I would have eaten America alive.

If you have any queries regarding the Poem or any other issue you are free to comment down below.