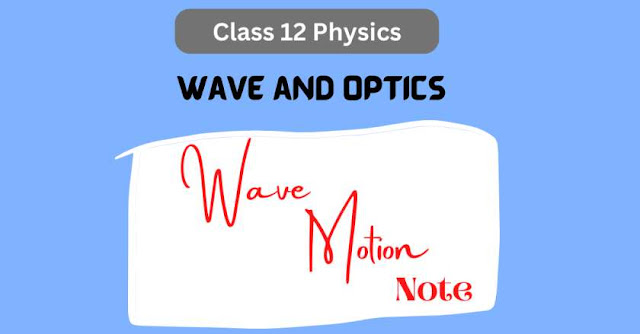 Hey energetic students. Welcome to the IOE Notes. If you are here searching for the Wave motion complete note then hold on you are in the right place. Here you will find the wave motion notes in PDF.

You will get the complete solution of the NEB new curriculum and syllabus.

Ans: A wave motion is a continuous transfer of distance from one part of a medium to another through successive vibrations of the particles of the medium about their mean positions.

2. What is a mechanical wave?

Ans: The waves which require a material medium for their propagation are called mechanical waves.

3. What is a Transverse wave?

Ans: The wave in which the particles of the medium vibrate about their mean position perpendicularly to the direction of propagation of the wave is called the transverse wave.

4. What is a longitudinal wave?

Ans: The wave in which the particles of the medium vibrate along the direction of propagation of the wave is called a longitudinal wave.

5. What is a progressive wave?

Ans: A progressive wave is one in which the disturbance is continuously transmitted along the direction of propagation of a wave.

Ans: The distance between the two nearest particles of the medium vibrating in the same phase is called wavelength. It is denoted by λ.

7. What is the frequency?

Ans: Frequency is the no of waves or crests passing through a given point per second. This is equal to the no of oscillations completed by the particles of the medium in one second.

Ans: Period is the time required for one complete wave to pass a given point. Since F waves are produced in one second, then F=1/T.

Ans: The maximum displacement of particles of medium from equilibrium positions when a wave passes through it is called the amplitude `a` of the wave.

Ans: The velocity of a wave is the distance traveled by a crest in one second. A wave travels a distance of one wavelength λ in a time equal to one period T. Then, wave velocity, V=λ/T = Fλ.
Note: I hope you like the Notes on the wave motion. If you have any unsolved problems related to wave and optics, you can comment down below. We will respond to your issues as soon as possible.